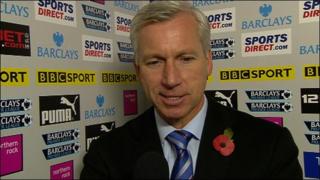 Newcastle boss Alan Pardew is thrilled with his team as they continue their unbeaten start to the season by beating Everton 2-1 to go second in the Premier League table.

Pardew thanks the St James' Park crowd for their support and hails "one of our best defensive displays" as his team withstand Everton's second-half fightback to take all three points.

Newcastle's fans will get a chance to assess their team's progress when they travel to Manchester for their next two Premier League games, taking on City first and then United.