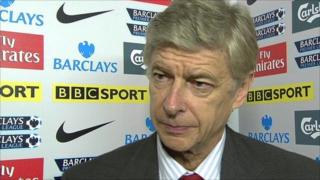 Too far behind to target top spot - Wenger

Arsenal manager Arsene Wenger says his side are being "pragmatic" and "humble" in their Premier League ambitions, despite securing a fourth consecutive league win by cruising past West Bromwich Albion.

Robin van Persie scored one goal and made two more in their 3-0 win over West Brom at the Emirates.

Wenger says his players are more confident than they were a month ago and hopes they return from the international break "in good shape".