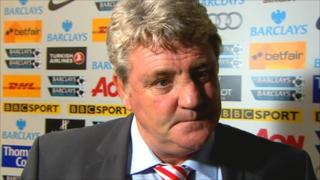 Sunderland boss Steve Bruce says he is "destined" to never have success at Old Trafford,

Saturday saw Sir Alex Ferguson celebrate the 25th anniversary of his appointment as Manchester United manager, but the only goal in the low-quality match came when former United defender Wes Brown put the ball through his own net.

The Black Cats boss hopes his side can turn a corner this season and believes they have "the nucleus of a very decent squad".