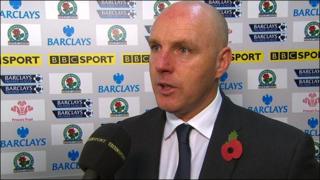 Blackburn boss Steve Kean praises his players' attitude and commitment after the 1-0 home defeat by Chelsea.

Kean says that if his players keep up that level of performance then positive results will soon arrive.

The under-fire Scotsman was once again the subject of a protest and banners from some home fans after the match but he insists that the majority of fans are behind him.