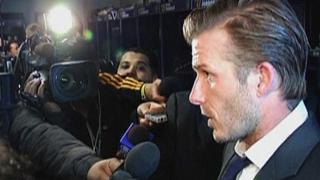 Beckham motivated by success on pitch

After helping LA Galaxy reach the MLS Cup final, David Beckham says his main motivation remains performing well on the pitch, rather than looking after his personal 'brand'.

An LA Galaxy side featuring Beckham and Robbie Keane beat Real Salt Lake 3-1 in the Western Conference championship on Sunday night, setting up a league-deciding meeting with Houston Dynamo.

The former Manchester United and Real Madrid star's five-year contract with LA Galaxy expires at the end of this campaign but the 36-year-old says he still craves more success on the pitch.