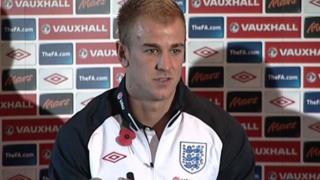 Manchester City and England goalkeeper Joe Hart says the international squad are happy that Fifa has decided to back down over the Football Association's request for the players to wear poppies on their shirts for Saturday's friendly against Spain.

Meanwhile, defender Phil Jones believes it is good for the players to pay their respects by and hopes the team can also honour the memory by beating the World Cup champions at Wembley.