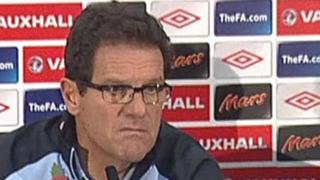 England boss Fabio Capello names Frank Lampard as his captain for Saturday's friendly against Spain and says John Terry will start on the bench, but will lead out the team against Sweden on Tuesday.

Capello insists Terry is "still a team leader" despite being the subject of police and FA investigations over an alleged racist remark, and says he is "innocent until proven guilty".

The Italian also discusses his reasons behind resting the Chelsea skipper, experimenting with different centre-backs against Spain and his pride at to mark Remembrance Day.