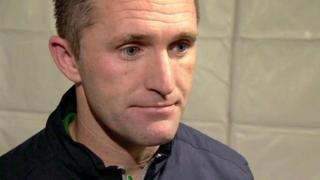 Republic of Ireland captain Robbie Keane says the 4-0 win in Estonia in Friday's Euro 2012 qualifier is a "great result", but adds that they "can't get too carried away" ahead of Tuesday's second leg.

Midfielder Keith Andrews, who scored and set up a goal in the win, comments that the result is "hard to believe" and reveals the team have a "real hunger" to qualify for next year's finals in Poland and Ukraine.

Goalkeeper Shay Given adds that they were "anxious" heading into the game but says they are now hoping for a "big night" in Dublin to wrap up the tie.