We've had some quality performances, some not so good, and one or two frankly very poor, but in the upturn in form of the last few months there is enough to suggest that Wales can go into the 2014 World Cup qualifying campaign with real confidence.

Wales will fight for a place in Brazil in a qualifying group containing Croatia, Serbia, Belgium, Scotland and Macedonia - it is one that should hold no fear for Wales.

However, the emphatic win over Norway - and the run of victories that preceded it - was a far cry from Gary Speed's first game in charge.

That saw Wales well beaten, 3-0, by the Republic of Ireland in Dublin in the first of three games in the Carling Nations Cup.

This was followed by Speed's first qualifying game in charge, and a massive tie against England at home in March.

It was a lacklustre performance at the Millennium Stadium, Wales conceding two early goals to fall to their fourth defeat in four games in the Euro 2012 campaign. 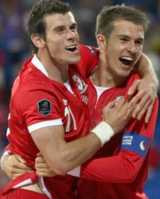 It was a performance that impressed on the new boss the size of the task he faced.

At the end of May, Wales once again travelled to Dublin to face the Scots and a very young Northern Ireland squad.

After a good first half against Scotland in which Rob Earnshaw put them ahead, Wales were outplayed in the second, Scotland scoring three times.

Speed got his first win two days later against Northern Ireland, with two goals from new captain Aaron Ramsey, and Earnshaw getting his second goal in as many games - but, in truth, it was still a far from convincing performance.

Then in August came a friendly with Australia at Cardiff City Stadium. Wales lost 2-1, but it was the uninspiring performance, rather than the scoreline, that induced such disappointment.

It highlighted just how far Wales had fallen as a nation.

In fact the result meant Wales dropped to their lowest-ever position in the Fifa world rankings (117). They were down there with the likes of San Marino, the Faroe Islands and Liechtenstein.

But Speed, who questioned the rankings, must have had strong words with his men after the defeat by the Aussies as, in the next four games, the lads were outstanding and showed the potential I always thought this young squad held.

The first victory of the Euro 2012 campaign came in a 2-1 win over Montenegro, a team that had not lost in their opening four games, with Steve Morison and Ramsey on target.

The performance that night in September was top class - and was followed four days later by a performance of equal if not greater accomplishment against the English at Wembley.

Wales were outstanding and if Earnshaw had had his scoring boots on they would have come away with the point they deserved at the very least.

The final two games of the group produced two very impressive performances, with wins against Switzerland in Swansea and Bulgaria in Sofia, Ramsey and Gareth Bale scoring the goals.

It is those last three qualifiers, and the friendly with Norway, that have renewed the hope, and indeed belief, going into the 2014 qualifying campaign.

Add to those names Craig Bellamy, Ashley Williams, Andrew Crofts, Joe Ledley and Morison, and I believe we have a great chance of being successful in Group A.

Finally, I have to mention Team GB. I have no problem with any of the Welsh boys playing in the Olympics - after all, what an honour it would be for the likes of Bale, Ramsey and Allen.

However, it should not be at the cost of our independence as a footballing nation.

The players must know what the consequences may be if they represent Team GB in 2012.

Fifa and its president Sepp Blatter could potentially ask why, if all four British nations can come together as one for the Olympics, they can't also do so for the World Cup and European Championship.

If the Welsh boys understand this I am positive they will not go anywhere near the Team GB football shirt.