England coach Fabio Capello believes he has unearthed a new generation of talent ahead of Euro 2012 following back-to-back 1-0 wins at Wembley.

"I looked for something new and found it," said Capello. 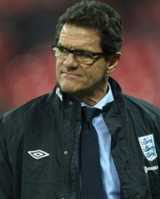 "I've found it in Rodwell, Walker and Jones. These three are interesting."

Of midfielder Rodwell, 20, right-back Walker, 21, and the versatile Jones, 19, Capello added: "They are really good technically, really good physically and all three are fast. This is important in modern football."

Capello, who will step down as coach after next summer's European Championship in Poland and Ukraine, was delighted to secure the result that ensures England will finish 2011 unbeaten.

An own goal from Daniel Majstorovic after 22 minutes gave England victory over the Swedes.

"It was really important to see Jones, Walker and Rodwell against a team that is well organised on the pitch and difficult to play against," added Capello.

"I saw these three players play really, really well. It was important to see Jones play in the position where I usually play Scott Parker, in front of the back four."

Asked whether Rodwell had now played himself into contention for Euro 2012, Capello said: "At the end of the season, I will decide.

"I hope all the midfield players will be fit, but Rodwell is a really interesting young player. I hope the competition for the Euros will be strong for all players and all positions."

Rodwell almost marked his first start with a goal, heading against the post from a Stewart Downing cross.

"There is an increasing sense that England's old guard is now being replaced, or will be replaced very soon, by a fresh look to Fabio Capello's squad."

"I managed to get in a few goalscoring positions and felt I should have scored one or two," he said. "But you've got to take the positives from the game."

As for Walker, he was full of optimism for the future.

"It's an exciting squad now," he said. "It's full of youngsters - me, Danny Welbeck, Phil Jones, Rodwell - the list goes on. We're all in the manager's thoughts and I hope we're there in the summer."

Chelsea's John Terry wore the captain's armband again having played no part in the win over Spain last Saturday.

The England defender is currently part of a police investigation following allegations that he directed a racial slur at QPR's Anton Ferdinand during a Premier League match on 23 October.

Terry said he never considered quitting as skipper in light of the recent developments.

"No chance," he said. "I would never step down. It [being England captain] is something I dreamed of as a boy.

"When I was four or five, I used to watch England games and it's something I dreamed of being.

"I worked very hard to get here. I'm very passionate, very confident being England captain and very proud to be, also.

"It's a great achievement, walking the side out, and I'm very proud to do that."

The crowd, which at 48,876 was the lowest for an England game since the new Wembley opened in 2007, gave Terry a mixed reception when his named was announced prior to kick-off.

"I said yesterday [Tuesday] the England fans have always been great with me and the players, they are always behind us win, lose or draw," added the Chelsea centre-back.

"They get upset at times - like we all do - we're very passionate and that's what makes us the very best.

"We've got a great set of fans and [we've had] some great performances, so if we can keep that momentum for the next six months then hopefully things will be a lot better."

England's win was their first over Sweden in 13 attempts. Their last victory over the Scandinavians came in 1968.

"It's fantastic to break the hoodoo," said England midfielder Gareth Barry. "The winning habit is there at the moment and we've got to keep the momentum going."

Barry thought he had scored the winner but England's 2,000th international strike was eventually ruled as an own goal.

"I'm not too worried," said the Manchester City player. "I'm not going to cry about it. I got a little touch on it but it's taken a deflection and flew into the corner."

Joe Hart is the only player to have started all nine of England's games in 2011, which have yielded six wins and three draws.

"It's a great record and we're all very proud of that inside the camp," said the Manchester City goalkeeper.

"We'd have liked to have won all nine but we can't do that and fortunately we're getting results."

England will find out which of four groups they will play in at Euro 2012 when the draw is made on 2 December.

Capello's side are expected to be among the second seeds, alongside the likes of Germany and Russia.

Uefa is due to announce those seedings on Wednesday, following the completion of the play-offs.

Republic of Ireland, Portugal, Croatia and Czech Republic all won on Tuesday to join Poland, Ukraine, Spain, the Netherlands, Germany, England, Russia, Italy, France, Greece, Denmark and Sweden in the 16-team competition, which starts on 8 June.