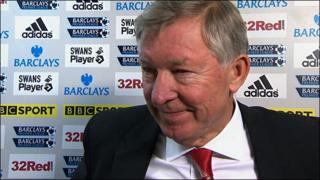 Manchester United boss Sir Alex Ferguson is pleased with improvement in his side's concentration levels as they record their third successive 1-0 Premier League win, with victory at Swansea.

Ferguson says that recent criticism about how easily teams have been able to create chances against Manchester United is perhaps justified, and is reassured by a better defensive display in Wales.