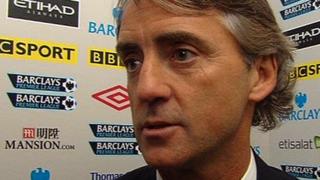 Manchester City boss Roberto Mancini is satisfied after his players return from the international break with a 3-1 victory over Newcastle.

Penalties from Mario Balotelli and Sergio Aguero, either side of a strike from Micah Richards, eased the hosts to their 11th win out of 12 games in the Premier League.

While Newcastle faced up to their first defeat of the season, despite a late consolation goal from Dan Gosling.