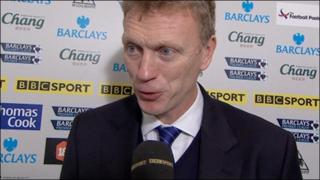 Everton boss David Moyes is proud of his players as they bounce back from a goal down to beat Wolves 2-1 at Goodison Park.

Moyes admits the penalty that wrapped up the Everton win was "soft" but said the spot-kick given against his side was also debatable.

Moyes is pleased with his team's performance but feels they should have made more of their chances and increased the margin of their victory.