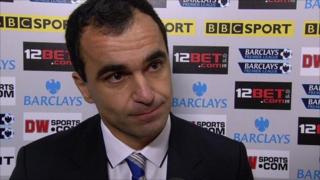 Wigan manager Roberto Martinez believes his team were a "joy to watch" during spells of their 3-3 draw against Blackburn Rovers.

Martinez says it was "shocking" that the second Blackburn goal was allowed as Morten Gamst Pedersen seemed to dribble the ball straight from a corner before firing in a low cross for Hoilett to head home from two yards.