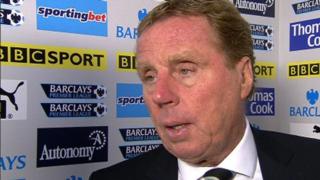 Tottenham manager Harry Redknapp says he enjoys watching his side play as two Emmanuel Adebayor goals seal a 2-0 home win over Aston Villa to take Spurs to third in the Premier League.

The Togolese forward scored a 14th-minute overhead kick before doubling the lead shortly before the break, both goals coming from Gareth Bale assists as Spurs overran their visitors.

It was Redknapp's first game back in charge since heart surgery and the win extends Spurs' unbeaten Premier League run to nine games, of which they have won eight.