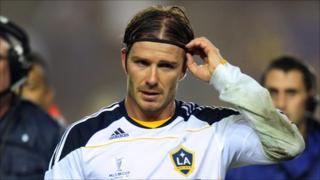 Beckham rules out return to England

Speaking on BBC Radio 1's Chris Moyles Show, David Beckham all but rules out a move back to England, saying "I've always said I've played for the biggest club in my eyes in England, and I couldn't see myself playing in another English shirt".

The ex-Manchester United player, whose contract at MLS side LA Galaxy expires next month, has been linked with a move to Paris St-Germain and admits he has had "big European clubs" after him but remains undecided over his future.