BBC Sport takes a closer look at the 16 teams who will contest the 2012 European Championship in Poland and Ukraine. Spain are the defending champions. Can Sweden take their crown? 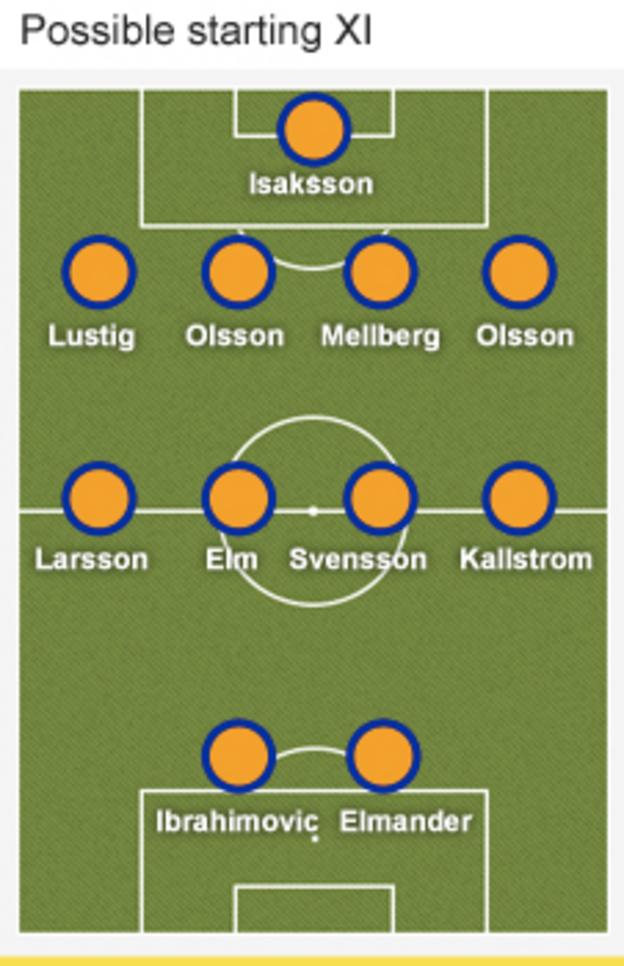 Former Sweden coach Lars Lagerback: "When Erik Hamren took over he wanted to play attacking football but during qualification he quickly realised you need to have a lot more balanced line-up and they are more balanced now, particularly defensively. They are a well-organised Swedish team with everyone working hard in defence. They can keep the ball very well but also hit teams on the attack too. They will look to do that as much as possible."

A very good season with a top half finish! Good memories

One of the most outspoken names in European football, Zlatan Ibrahimovic is Sweden's totem. No question - the former Barcelona striker has rich talent. But doubts remain about his ability to apply it on the biggest stage. Here, perhaps, is his chance to silence those critics. He once said he was the best player in the world. Let's see.

Lyon's left-footed midfielder Kim Kallstrom conjured up seven assists in qualifying - the most of any European player across the entire campaign (along with Germany's Mesut Ozil). He also chipped in with three goals. The 29-year-old will be aiming to utilise the influence he has gained in winning more than 80 caps for his country.

Tidy. Lost 1-0 against England at Wembley in the last match for both before the draw, Gareth Barry nodding the winner. Regular foes, they drew 2-2 in the group stages at the 2006 World Cup in Germany - and 1-1 at the 2002 World Cup in Japan & Korea. Sweden inflicted a painful 2-1 defeat on Graham Taylor's England at Euro '92.

Needing a win against the Netherlands to ensure Euro 2012 qualification as best runners-up, and thus avoid the potentially treacherous play-offs, Sweden produced the goods (a 3-2 victory in Stockholm) when it mattered against a team who had won every match of their group E campaign up to that point.

Going 2-1 down soon after half time, they nervelessly delivered an immediate response. Within 60 seconds Sebastian Larsson buried a penalty before, just a minute later, PSV Eindhoven forward Ola Toivonen put the determined hosts back in front - and his delirious nation on their way to Euro 2012.

Erik Hamren has proved his worth after taking over from Lars Lagerback when Sweden failed to qualify for the 2010 World Cup. One of the most respected coaches in Scandanavia, he has managed teams in Norway, Denmark and Sweden. Took Aalborg to the Danish title - and into the European Champions League - back in 2008.

Decent. Sweden were inspired by playing in front of their home fans in 1992, beating England 2-1 in the group stages as they made the last four. Unfortunately an even more talented Germany side - the reigning world champions - stood in the way of Thomas Brolin and Co, beating the hosts 3-2 in Stockholm with two Karlheinz Reidle goals.

You know the grainy footage where a fresh-faced Pele slays some unwitting victims to inspire his Brazil team to a euphoric victory in the World Cup final aged just 17? The other team was bewildered Sweden. The 1958 World Cup runners-up had not even qualified four years earlier but thrived on the pressure of playing on home soil.

Olympic champion in 2004, she now competes in the long jump having switched events in 2008. She made her international breakthrough with gold at the European championships in Munich in 2002, before securing the Olympic title in Athens two years later.

Ikea. The Swedish company, founded in 1943 by 17-year-old Ingvar Kamprad, is now the world's largest furniture retailer. With nearly 300 stores across the globe, it even has one in the Dominican Republic.