BBC Sport takes a closer look at the 16 teams who will contest the 2012 European Championship in Poland and Ukraine. Spain are the defending champions. Can Germany take their crown? 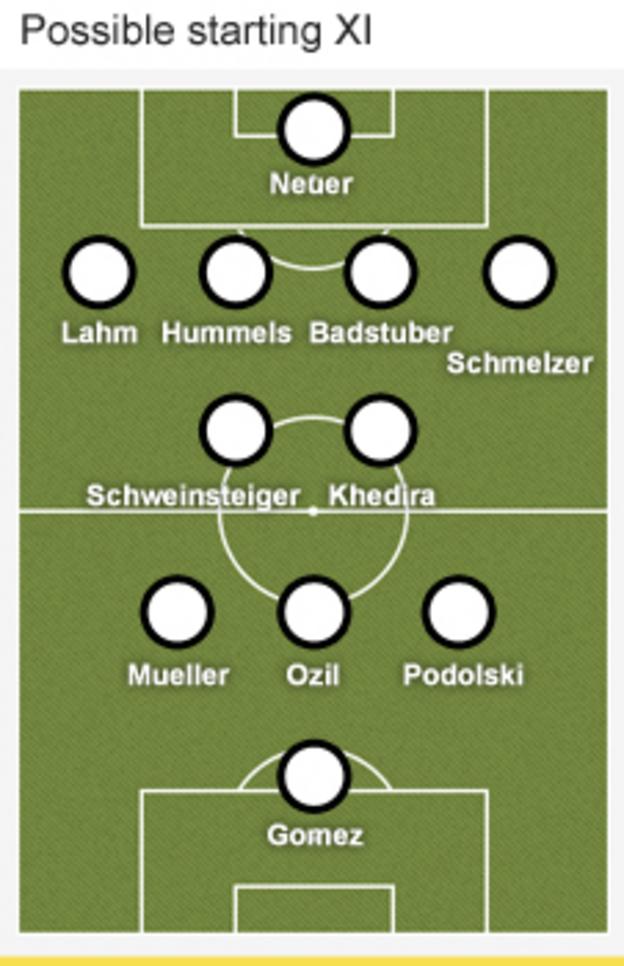 Germany's game has become more possession based since the 2010 World Cup. They look to dominate in midfield and rapidly change positions up front; the front four are very fluid - especially if veteran forward Miroslav Klose recovers in time. Joachim Loew has also tried slight modifications to the formation, in order to make the team less predictable. In recent friendlies against the Netherlands and Brazil, Germany played with attacking verve and a level of creativity that had the domestic critics drooling with full-back Philipp Lahm, Bastian Schweinsteiger and Mesut Ozil the key men to make the system function.

Relatively unknown to the masses before the 2010 World Cup, Mesut Ozil exploded onto the international scene with a series of eye-catching displays in South Africa as Germany played some of their most offensive football in memory.

After being nominated for the Golden Ball Award - given to the tournament's best player - the 23-year-old 'Number 10' soon moved from Werder Bremen to Spanish giants Real Madrid. He racked up seven assists in the qualifying campaign.

The time could be right for Bayern Munich's visionary young midfielder Toni Kroos to shine after an influential qualifying campaign. He won the Golden Ball for the best player at the 2007 FIFA Under-17 World Cup.

Quick feet, flawless technical skills, endlessly creative - some say he's a Messi in the making. Germany's technical director Matthias Sammer says he is one of the best young players he has ever seen. Has helped club side to past two German league title.

Of any football nation, Germany is the England national team's biggest adversary. Sir Alf Ramsey's team famously beat them 4-2 after extra-time in the 1966 World Cup final - their only triumph in a major tournament. But, since then, Germany have largely frustrated England when it truly counts - beating them in the 1990 World Cup semi-final, along with the 1996 European Championships semi, as well as brutally knocking them out of the 2010 World Cup in South Africa.

Robbie Keane's late goal denied Germany all three points against Ireland after a 1-1 draw in the group stages of the 2002 World Cup. But, led by Oliver Kahn, the Germans still went on to make the final (while Mick McCarthy's side made the last 16). Germany last lost to Ireland in 1994, a 2-0 World Cup warm-up friendly defeat at home.

Coming off the back of a 6-1 thrashing of Azerbaijan in their second game, Germany really set the tone for their flawless campaign with another ruthless win over far tougher opponents - their main group A rivals Turkey.

Unperturbed by the massive Turkish presence in the 75,000 crowd, thanks to the large immigrant population in Berlin, Joachim Loew's team showed greater attacking endeavour to see off the visitors 3-0 thanks to two Miroslav Klose goals either side of a Mesut Ozil effort. Ozil's goal was the pick, slipping the ball home after being fed by ever-marauding full-back Philipp Lahm.

Always dapper, Joachim Loew burst into the limelight as Jurgen Klinsmann's assistant at the 2006 World Cup. 'Jogi' was seen as the tactical genius behind the scenes as Germany thrilled their fans with a new brand of attacking football.

He continued that philosophy four years later in South Africa, and showed he is not afraid to make a tough decision by dropping Michael Ballack for Euro 2012 qualification in order to bring through younger talent. Has a contract until 2014.

So it's just the six major tournaments that Germany have won in total, the European Championship crown having been raised to the skies in 1972, 1980, and 1996. That last triumph came on British turf, with the fine England team led by Terry Venables dramatically knocked out of the semi-finals at Wembley Stadium on penalties.

It's rare for Germany not to perform well when billions of eyes across the globe are watching them. Three times they have lifted the World Cup (across different generations in 1954, 1974, and 1990) - and they have also reached the final on another four occasions. Daunting.

Germany has won more equestrian gold medals than any other nation, but London 2012 will be the first Games since the national federation disbanded its team in 2009 after a string of doping allegations. Isabell Werth, Helen Langehanenberg and Nadine Capellmann will be looking to land more worthy headlines in London.

Weymouth-born Paul the Octopus lived in a tank in Oberhausen - from where he became world-famous after his feeding behaviour was used to correctly predict the winner of each of Germany's seven matches at the 2010 World Cup, as well as the winner. A legend.

Cars. Just like its national football team, the strength of German automobile manufacturing seems to go on and on. BMW, Mercedes and Audi appear to have the executive market wrapped up better than an efficient left-back with a woozy winger in his back pocket.