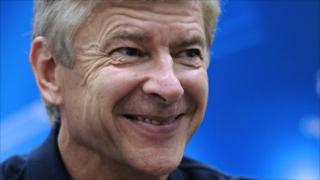 Manager Arsene Wenger admits it is "a big night" for Arsenal as they prepare to face Borussia Dortmund in their Champions League match at Emirates Stadium on Wednesday.

Wenger says both teams "have grown" since they last met in Dortmund in September, a match which ended in a 1-1 draw.

Wenger also discusses a bet made on Twitter by Arsenal midfielder Jack Wilshere, who has promised to pay £3000 to charity if Tottenham finish above Arsenal, and he wants Spurs fans to give £1 if the Gunners come out on top.

Wenger adds that he will see out his contract at Arsenal, which runs until 2014, as long as he is wanted by the club and is healthy enough to do so.