BBC Sport takes a closer look at the 16 teams who will contest the 2012 European Championship in Poland and Ukraine. Spain are defending champions. How will the Republic of Ireland fare? 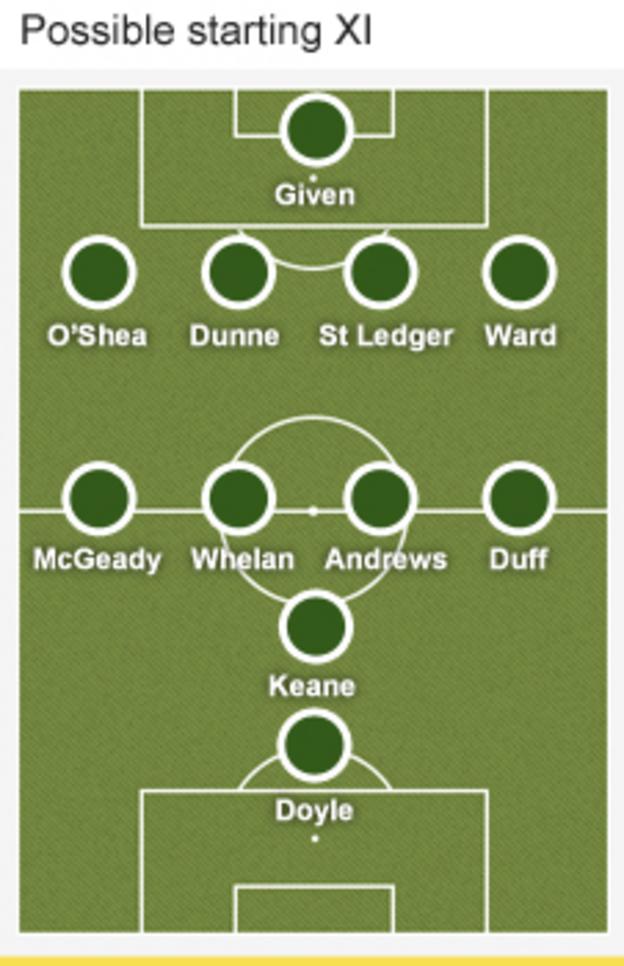 Former Ireland midfielder Matt Holland: "Ireland's success in qualifying has come from being difficult to beat. They have an outstanding goalkeeper in Shay Given, and Richard Dunne has been solid in the middle of the defence, while the full-backs tuck in and defensive midfielders remain disciplined.

"Creativity is down to the two wide men in Aiden McGeady and Damien Duff, who often switch wings, with forwards Robbie Keane and Kevin Doyle making a front four. An added extra is Sunderland winger James McClean, who has made an impact in the Premier League and gives Ireland a more direct option."

Congrats to every1 at Man City. Really happy for all connected to the club. The Blue Moon is rising.

He contributed seven goals in qualifying, an impressive tally from a side that often struggles to create clear-cut chances. The captain may have lost a yard or two of pace, but there is no doubting the predatory instincts that have made him Ireland's record scorer with over 50 goals.

The 31-year-old joined Los Angeles Galaxy last August, and created the only goal in the MLS Cup final. The striker used the winter break to recharge his batteries in time for the 2012 season, also spending a brief but productive loan spell at Aston Villa. Fatigue should not be an issue for him this summer.

Keane scored three times in four appearances at the 2002 World Cup, with his injury-time goal in the 1-1 draw with Germany the highlight of the tournament for many Irish fans.

He was part of the Irish team that won the European Under-18 title in Cyprus in 1998, although he missed in the penalty shoot-out win against Germany in the final.

In an otherwise workmanlike midfield, Aiden McGeady is one of the few players capable of producing the unexpected. Spartak Moscow are believed to have paid Celtic at least £9.5m for the left winger in 2010, making him the most expensive export from Scottish football.

The Glasgow-born player is eligible for the Republic through his Donegal-born grandmother.

Handed his Ireland debut in 2004, he failed to score in his first 37 international appearances.

However, he netted twice in qualifying (against Macedonia and Andorra), albeit both goals were aided by heavy deflections.

Perhaps the outstanding individual display came from centre-back Richard Dunne, who produced a heroic performance in Russia, where the Republic somehow held on for a goalless draw.

But in terms of a team display, it is hard to look beyond the 4-0 play-off win in Estonia, a first-leg result which all but guaranteed qualification. Ireland have often looked uncomfortable in matches where they begin as favourites, but on this occasion Giovanni Trapattoni's side showed no mercy, albeit against limited opposition.

Robbie Keane scored two and made another, while industrious strike partner Jon Walters netted on his full competitive debut, suggesting he may be a viable alternative to Kevin Doyle.

Giovanni Trapattoni's tactics may not please the purists, but they have certainly proved effective. After watching his side clinch qualification, the wily Italian suggested his side could emulate Greece's surprise victory at Euro 2004.

It may have been a tongue-in-cheek remark, but 'Trap' is certainly overdue some luck at a major international tournament. His Italy side were controversially eliminated by South Korea at the 2002 World Cup, and went out at the group stage at Euro 2004 despite collecting five points.

After securing qualification for Euro 2012, the 73-year-old agreed a two-year contract extension that will keep him with Ireland until the 2014 World Cup.

'Trap' began coaching 37 years ago, before any of the Irish squad were even born. His CV reads like a who's who of European football - AC Milan, Juventus, Inter Milan, Bayern Munich and Benfica.

Ireland went out at the group stage in their only previous appearance in 1988, but the tournament still holds fond memories for Irish supporters. Ray Houghton's goal secured a famous win against England before the Soviet Union were held to a draw, but defeat to the Dutch sent Ireland out.

Jack Charlton's no-nonsense tactics took Ireland to the quarter-finals of the 1990 World Cup, where they lost narrowly to hosts Italy. They exacted revenge four years later, beating the Azzurri in the group stage of USA '94 before losing to Holland in the second round.

Katie Taylor's five consecutive European gold medals and three world titles make her a contender to be in the first wave of female Olympic boxing champions. Taylor helped get the sport into the London 2012 programme, boxing in showcase fights to convince International Olympic Committee officials.

Sir Terry Wogan - a broadcasting legend synonymous with Irish success in Europe, having commentated on all but one of Ireland's seven Eurovision Song Contest triumphs.

St Patrick's Day - quite possibly the most widely celebrated saints' day in the world. That's all the more remarkable given that the man himself - a fifth century priest - is believed to have been born in Wales, and only ended up in the Emerald Isle after being kidnapped by Irish pirates.