BBC Sport takes a closer look at the 16 teams who will contest the 2012 European Championship in Poland and Ukraine. Spain are the defending champions. Can World Cup runners-up Netherlands go one better this summer? 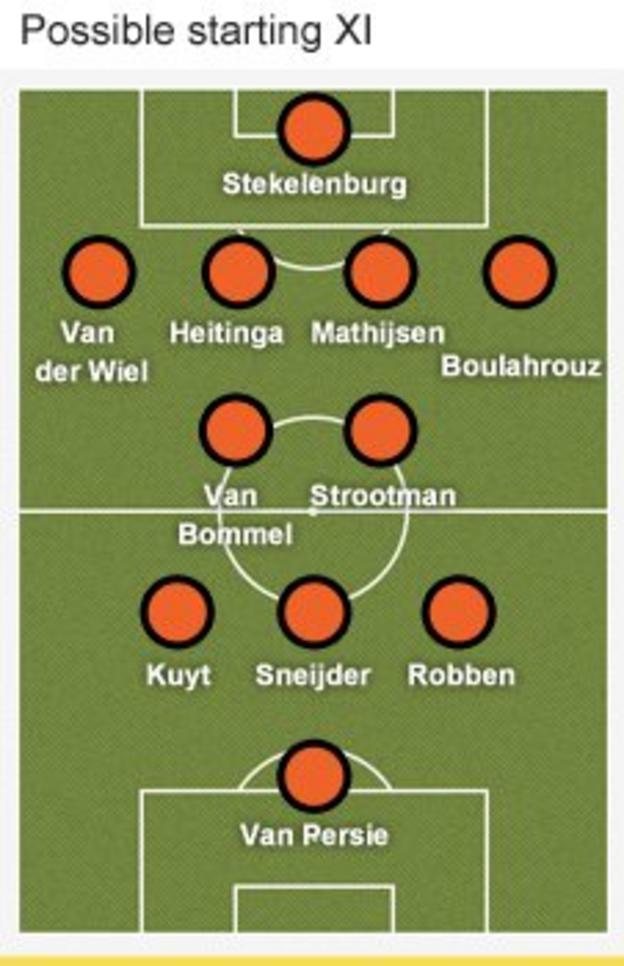 Coach Bert van Marwijk is first and foremost a pragmatist. His preference for two defensive midfielders is still a bone of contention at home, just as it was when they reached the 2010 World Cup final. Wesley Sneijder's improved form in recent weeks is a huge boost. Along with Arjen Robben and Robin van Persie, he makes the Oranje serious contenders. One problem is that van Marwijk's formation makes it difficult to accommodate on-fire Klass-Jan Huntelaar, who scored against England in February.

Fans been brilliant! Thanks for all your support! We appreciate it a lot!

Klaas-Jan Huntelaar had to settle for a place on the bench at the 2010 World Cup, but the Schalke striker pressed his claims for a regular starting spot with a red-hot 12 goals in eight qualifiers. While 'The Hunter' filled his boots against minnows San Marino, scoring five times in total, he also netted in both matches against Group E runners-up Sweden.

The 28-year-old has regained confidence following a permanent move to Schalke from Real Madrid.

Dutch coach Bert van Marwijk's preference is for a 4-2-3-1 formation, meaning there is only one striking spot up for grabs - which, in turn, means either Huntelaar or Robin van Persie could miss out. Hard to imagine, given the Arsenal striker's searing form.

Huntelaar started the first four qualifiers before picking up a knee injury which ruled him out of the double header against Hungary. Van Persie netted in both games against the Hungarians and kept his place for June's glamour friendly against Brazil, prompting Huntelaar to ask for "a little more faith" from Van Marwijk. Perhaps a tactical change is on the cards.

After winning rave reviews for his punishingly impressive consistency in the heart of midfield, PSV Eindhoven's 22-year-old captain Kevin Strootman is being called 'the new Roy Keane' in some quarters, having quickly established himself as a key player for both club and country. Strootman is vying with Manchester City's Nigel de Jong for a starting role, having only made his debut in February 2011.

Huntelaar's 12-goal haul in qualifying was one short of the record, set by Northern Ireland's David Healy in the Euro 2008 preliminaries

Given the comparisons with the legendary former Manchester United man, and that he is noted for his fine passing vision, it comes as no surprise that Strootman is being linked with a £15m move to Old Trafford this summer.

The Dutch netted 25 goals in their four matches against Hungary and San Marino, but their outstanding display came at home to fellow Euro 2012 qualifiers Sweden, who were thrashed 4-1 at home.

The Netherlands were eliminated by Luxembourg in qualifying for the 1964 European Championship.

The Swedes were four goals down inside an hour, with Afellay and lone striker Huntelaar both netting twice.

He led his side to the final in South Africa, masterminding wins against Brazil and Uruguay, but Holland's robust approach in the defeat to Spain earned Van Marwijk plenty of criticism, with Johan Cruyff branding the Dutch display "anti-football".

A midfielder capped once by Holland, his biggest success as a club manager was winning the 2002 Uefa Cup with Feyenoord.

Their only major piece of silverware came at the 1988 European Championship. Marco van Basten's famous volley and a Ruud Gullit header gave them a 2-0 victory against the Soviet Union.

Since then they have reached the knock-out stages of five successive tournaments but have not gone beyond the semi-finals.

Rider Adelinde Cornelissen won the World Cup dressage title for a second successive season on home turf in April. Riding since the age of six, she will one of the favourites for the Olympic title on board Jerich Parzival.

Santa Claus.... sort of. While it is well documented that the bearded philanthrope resides in the North Pole, his name can be traced back to Sinterklass, a traditional winter holiday figure celebrated in the Low Countries in early December.

Big Brother. Love it or hate it, the reality show conceived by Dutch company Endemol has been astonishingly successful. There have been over 250 Big Brother winners around the globe, with the format exported to countries as far away as Albania, Colombia and the Philippines.