BBC Sport takes a closer look at the 16 teams who will contest the 2012 European Championship in Poland and Ukraine. Spain are the defending champions. Can they retain their crown? 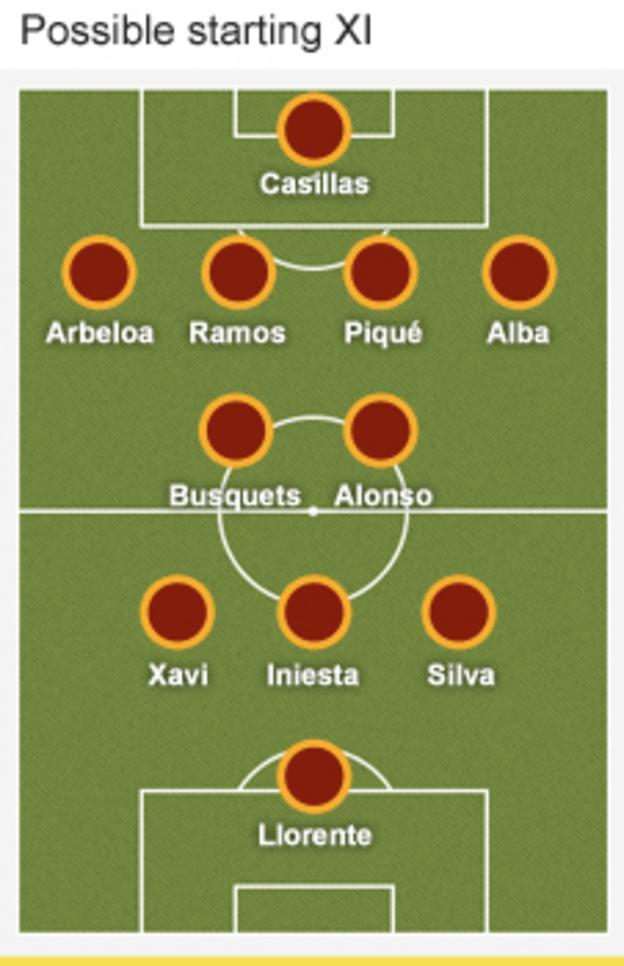 Guiding a squad that has won everything already, Vicente del Bosque has to cope with the prospect of key players that are "melted" (in the words of Zinedine Zidane) with tiredness after a punishing schedule. The coach did this superbly at World Cup 2010, playing a more containing than dynamic possession game, which almost became a 4-3-2-1. Sergio Ramos is likely to move to centre-back to replace the injured Carles Puyol, though Athletic Bilbao's Javi Martínez could help circulate the ball better.

Get well soon Carles Puyol. We will miss you but you'll be back in no time!

Tricky... Spain has an incomparable galaxy of glittering talent. But, if there's one man they might - just might - miss, then you'd plump for pass-master Xavi. The Barcelona midfielder is the world class linchpin around which his world class colleagues (for club and country) weave their magic, pinging his way out of trouble and carving delicious gaps that no other player on the planet can conjure. Minute upon minute. Match upon match. Season upon season. Xavi oozes dominant class.

He was Uefa's player of the tournament at Euro 2008, when he completed 89% of his passes, including an assist for Fernando Torres' winner against Germany in the final. He was just as influential at the World Cup - on average, he attempted a pass every 57 seconds in South Africa.

With David Villa recovering from injury and Fernando Torres trying to rediscover his best form, Fernando Llorente will hope to get a chance up front. In outstanding form for the Athletic Bilbao side which reached both the Europa League and Copa del Rey finals this season, Llorente's displays have made him one of the most coveted strikers on the continent.

His strength and aerial ability give Spain a completely different attacking option, but the 27-year-old has shown at club level that is much more than a mere battering ram; his build-up play, first touch and finishing skills are also exceptional.

He has a £30m buy-out clause in his contract, a fee he humbly calls "excessive". Previously linked with Tottenham, Manchester City are reported to be amongst his suitors this summer.

The most recent match between the two lives long in Irish memories. It was their last in a major tournament, and Spain broke their hearts by winning the second round knockout tie at the 2002 World Cup on penalties. Ireland have won just one of their past 13 encounters.

In their fourth game of eight qualifiers, Spain found themselves a goal down at half time in Granada after a crashing Jaroslav Plasil drive gave Czech Republic a shock lead. But manager Vicente Del Bosque merely tweaked his line-up and, with Fernando Torres and Santi Cazorla on the pitch and Andres Iniesta freed up in midfield, David Villa solved a rare problem to claim his country's all-time scoring record - and three points which kept them firmly on the road to qualification.

Barcelona's Villa skipped past Roman Hubnik to crack a firm shot under Petr Cech before lashing a fierce penalty past the Chelsea goalkeeper, right in the corner, after Iniesta was fouled by Jan Rezek.

A mustachioed, unassuming character from Salamanca, Vicente del Bosque led Real Madrid to the most successful spell in its modern history before being jettisoned in 2003. Credited by players for creating a sense of serenity within the gifted squad, he succeeded Luis Aragones after Euro 2008 and began his reign with 13 straight wins as Spain set a world record of 15 straight victories - and went on to lift the 2010 World Cup. An astute and liberating presence, he signed a new contract in April.

Spain went into the 2010 World Cup as 2008 European champions, winning the tournament for the second time after their 1964 triumph. It was in Austria and Switzerland, where they remained unbeaten, that their now-famous tiki-taka style of football - roaming movement, one-touch play, intricate short passing - really began to flourish. Fernando Torres scored the only goal of the final against Germany.

Until recent years, Spain were considered perennial underachievers in the same mould as England. Top-class players, but bereft of solutions when the chips are down - or a tournament mentality.

But, despite a shock opening loss to Switzerland, Spain were simply too good for the rest at the 2010 World Cup, which they won after beating the Netherlands 1-0 in the final via Andres Iniesta's late goal. Before that, they had never even reached a World Cup semi-final.

Rafael Nadal has won two Wimbledon championships so will know his way around the All England courts as he defends the Olympic tennis title he won against Fernando Gonzalez in Beijing. His old adversary Roger Federer is gunning for one of the few prizes that still eludes him though...

One the most innovative, quirky and original film directors around, Pedro Almodovar has been making ground-breaking films since his first feature in 1980. His last film, The Skin I Live In was released in 2011.

Football fans in Spain often open up a foil package to chomp on chorizo sandwiches in the stands. That may not have caught on elsewhere, quite yet, but the cured and smoked deep red sausage is a massive hit in kitchens and restaurants across Europe and beyond.