BBC Sport takes a closer look at the 16 teams who will contest the 2012 European Championship. Sublime Spain are the defending champions. Can co-hosts Poland nick their crown? 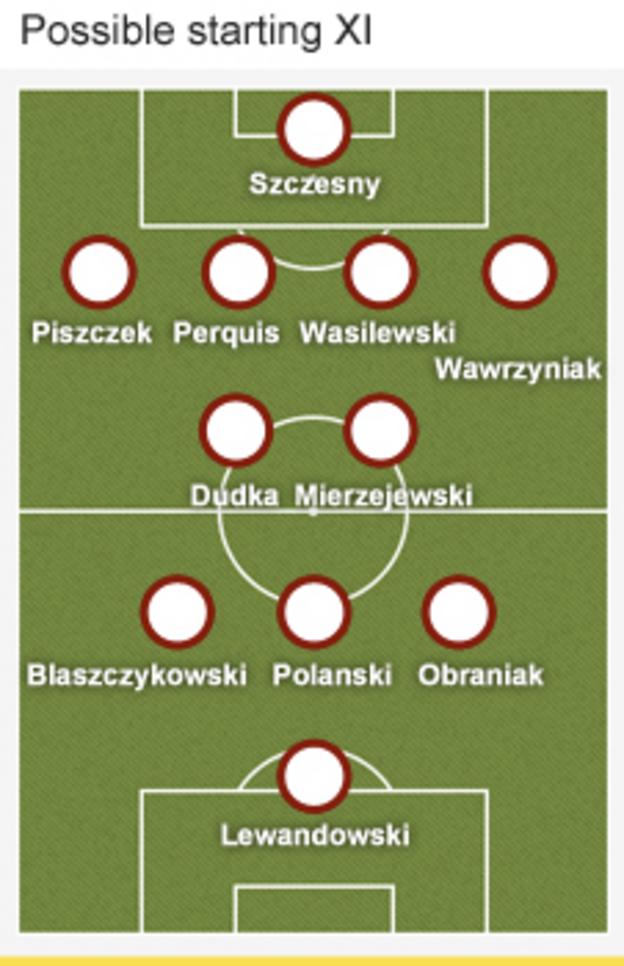 The vastly experienced Franciszek Smuda has been happy to look beyond the Ekstraklasa to compose his squad. Including players with Polish roots reared in France and Germany allows the coach to engineer a more high-energy approach, which has surprised opponents including Argentina and Germany in recent friendlies. The midfield is generally built to contain. Ahead of it, Borussia Dortmund striker Robert Lewandowski provides options; he can hold the ball up to relieve pressure, drop deep to receive and even get in behind defences.

Poland's outstanding player and biggest goal threat, Robert Lewandowski arrives at Euro 2012 in the form of his life.

He was voted the Bundesliga's Player of the Year for 2011-12 after firing Borussia Dortmund to the domestic double. His hat-trick against Bayern Munich in the German Cup final took his tally to 30 goals in all competitions (plus eight assists).

His form and fitness are absolutely critical to Poland's chances - they have no other forward in his class.

Lewandowski, who usually plays as a lone striker for club and country, was given his international debut in a World Cup qualifier in 2008, and took just nine minutes to get on the scoresheet.

The 23-year-old comes from a sporting family: his father was a national judo champion, his mother and sister played volleyball, while his fiancée is a traditional karate fighter who has won medals at world and European level.

A late call-up for Euro 2008 as a replacement for the injured Jakub Blaszczykowski, four years on Lukasz Piszczek is very much a key man for both club and country. Originally a right-winger or striker, his career has taken off since switching to right-back during the 2009-10 season.

He has refused to comment on speculation linking him with Real Madrid, but Poland's coach says the player is good enough to play at the Bernabeu: "He chews up his opponents and spits them out - Madrid is like a fairytale but Piszcek really would fit," Smuda said recently.

Poland did beat Argentina 2-1 in June - but key names such as Lionel Messi, Carlos Tevez and Gonzalo Higuain were missing as the South Americans put out a young, experimental side.

But their best performance was a 2-2 draw with a strong Germany side in September. The Poles, outstanding on the night, were seconds away from winning only for Brazil-born striker Cacau to equalise in injury time. The highlight was Lewandowski's 55th-minute opener - the striker pouncing instinctively on the ball to poke home after Dariusz Dudka was upended in the box - following a build-up which illustrated Poland's rich counter-attacking potential.

Franciszek Smuda took over in 2009 following the sacking of Leo Beenhakker, and immediately set about bringing down the average age of the squad, promising to play "offensive and attractive" football. An eight-match winless run in 2010 (including a 6-0 thrashing from Spain) proved a reality check, but results have picked up in the last 18 months.

Smuda frankly admits Poland do not have the same depth of talent they had in the 1970s and 1980s, and has therefore looked far and wide for eligible players. He has faced criticism for calling up French-born duo Damien Perquis and Ludovic Obraniak (who qualify via grandparents), plus the likes of Eugen Polanski and Sebastian Boenisch (both of whom left Poland for Germany as children, and represented the Germans at under-21 level).

Smuda's career has seen him represent 13 different clubs, and manage another 15. He played for a handful of sides in the North American Soccer League in the 1970s, including a brief spell alongside George Best at the LA Aztecs. He has coached in Germany, Poland and Cyprus, with his most notable achievement taking Widzew Lodz to the quarter-finals of the Champions League in 1996.

Searing World Cup form is not mirrored at Euros. Poland have only qualified once, and they failed to emerge from the 2008 group stages.

Inspired by a generation of gifted ball-players, most notably Zbigniew Boniek, Polish football flourished in the mid 1970s and early 1980s - and twice the national team finished third at the World Cup within the space of just eight years.

In 1974 they defeated both Italy and Argentina in the first group stage before beating Brazil 1-0 in the third-place play-off. No mean feat. Boniek scored a hat-trick against a talented Belgium side in the second round in 1982, but eventual winners Italy beat them 2-0 in the semis.

Piotr Malachowski's speed through the discus throwing action makes him a genuine gold medal prospect, but he will have to improve upon a disappointing display at the world championships in Daegu where he finished ninth.

One of the greatest composers ever, Frederic Chopin spent most of his adult life in France in the 19th century. But the child prodigy was Polish, born in a village near Warsaw called Zelazowa Wola. He died in Paris aged 39 - but his musical legacy lives on.

With over 60 international goals under his belt, how the Poles could use the ice-cool talents of Miroslav Klose, who was born in Poland but holds German nationality - and has performed brilliantly at the highest level for much of the past decade. He has said that it would be best for him not to be called German or Polish, but 'European'.