BBC Sport takes a closer look at the 16 teams who will contest the 2012 European Championship in Poland and Ukraine. Spain are the defending champions. Can Russia take their crown? 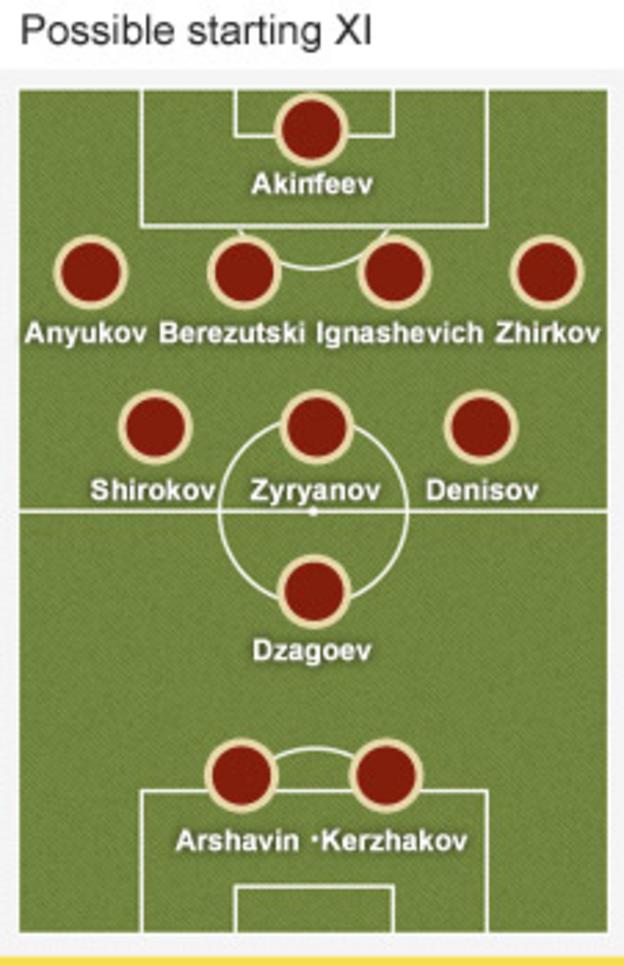 Dick Advocaat has not been overly experimental with his sides up until now, so it is likely that he will stick to the well-known players. Russia will probably set up with Aleksandr Kerzhakov up front, supported by Andrey Arshavin and Alan Dzagoev, while utilising Yuri Zhirkov's attacking runs on the flank.

Russia would also hope to use set-pieces, with Sergei Ignashevich and Arshavin both capable of scoring from free-kicks. As for plan B, Advocaat can call upon Pavel Pogrebnyak, Artyom Dzyuba or Roman Pavlyuchenko and switch to 4-4-2, with Aleksandr Kerzhakov supporting one of the tall forwards with crosses into the penalty area.

CSKA Moscow's Alan Dzagoev was named the Best Young Player in the Russian Premier League following a successful debut season with them in 2008-2009. The 21-year-old attacking midfielder from North Ossetia has already scored 25 league goals for them in fewer than 100 games, and scored four goals for his national side in the eight qualifying matches he played as Russia finished top of group B.

Andrey Arshavin left Arsenal during the January transfer window after a frustrating few years in the Premier League. Glimpses of quality - his four-goal haul at Anfield in 2009, a sublime winner against Barcelona in 2011 - were almost forgotten after a poor season this year. Now back in Russia with Zenit, Arshavin has the potential to light up the tournament in the same way he did four years ago.

Having suffered a shock 1-0 loss at home to Slovakia in the second qualifying game, Russia were gunning for revenge when they travelled to chilly Zilina in October. They got it.

Not only did their 1-0 win end their opponent's hopes of a top-two spot, it also ensured they would finish as group B winners - and qualify automatically - if they got a point against minnows Andorra in their last match. They duly won 6-0. Dzagoev's goal was worthy of winning such a crucial encounter, a long-range effort from 30 yards in the 71st minute after Roman Shirokov had missed a gilt-edged chance just moments earlier for the travelling Russians.

Dutchman Dick Advocaat - the first foreign coach to manage Rangers - is well-known to football fans. Despite taking his national team to the 1994 World Cup quarters and Euro 2004 last four during two stints in charge, 'The Little General' was not wildly popular in his homeland, notably falling out with Ruud Gullit in 1993.

Has managed other countries, such as South Korea, the UAE and Belgium, and shone in Russia - who he took charge of in 2010 - when winning the 2008 Uefa Cup with Zenit St Petersburg.

The European Championships have been a rich feeding ground for the Russians, who won the first edition in 1960 by triumphing in just three ties (an overall total of four matches). In the quarter-finals of the inaugural tournament, Spain refused to travel to the Soviet Union, who were subsequently handed a walkover last eight victory. They were also runners-up in 1964, 1972 and 1988, and were knocked out in the semi-finals last time around by eventual winners Spain.

The Soviet Union finished fourth in 1966, beaten by a Franz Beckenbauer-inspired West Germany 2-1 in the semi-finals.

Russia are expected to have a strong gymnastic squad at the Games, particularly Svetlana Khorkina, two-time Olympic champion and seven-time Olympic medalist.

Daria Kondakova is also on course to pick up a medal in rhythmic gymnastics.

Mikhail Gorbachev was the last head of state of the USSR, serving from 1988 until its dissolution in 1991. For his attempts at reform and a healthier relationship with the United States, he contributed to the end of the Cold War and ended the political supremacy of the nation's dominant Communist Party. He won the Nobel Peace Prize in 1990.

Vodka. Now drunk all over the world, the first known production of the sharp alcoholic spirit was in Russia in the late ninth century.