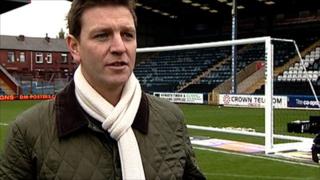 Former Manchester United winger Lee Sharpe says the use of goal-line technology in football is "well overdue", saying "it would be stupid not to put it straight in" as long as the technology is ready to be used.

Sharpe was speaking at a demonstration of a new system where cameras can detect almost instantly if a ball has crossed the line before sending an encrypted signal to the referee's wrist watch to alert them to whether a goal has been scored.