BBC Sport takes a closer look at the 16 teams who will contest the 2012 European Championship in Poland and Ukraine. Spain are the defending champions. How will co-hosts Ukraine fare? 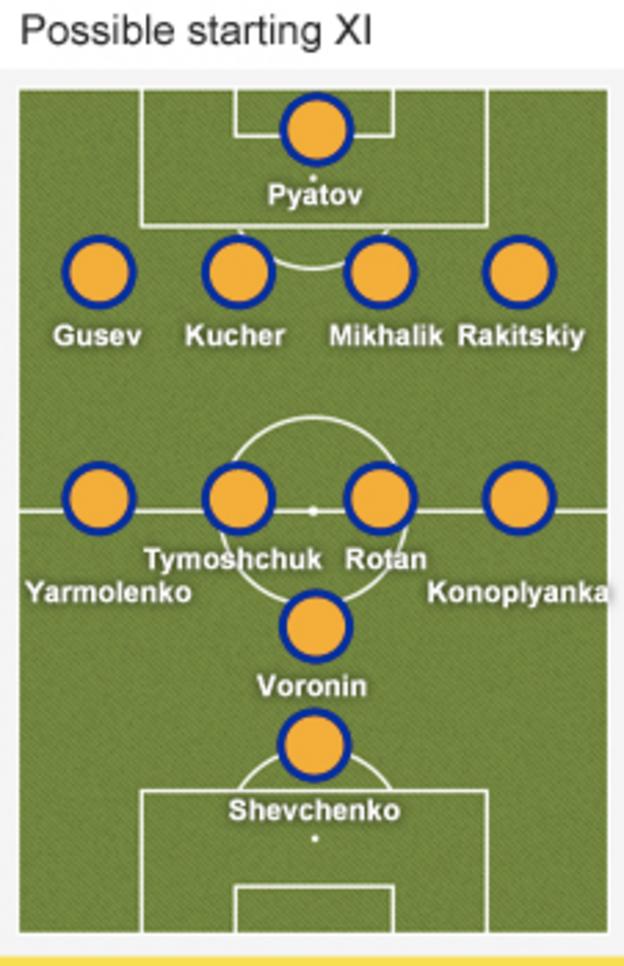 The Ukraine squad has been depleted by injuries to its defence but manager Oleg Blokhin will hope that key midfielders Andriy Yarmolenko and Yevhen Konoplyanka can provide the firepower for the likes of Andriy Shevchenko and Andriy Voronin. The co-hosts are a team that likes to counter attack but must do without experienced goalkeeper Olexandr Shovkovsky and injured Shakhtar defender Dmytro Chygrynskiy, so there will be areas to exploit. Voronin tends to drop behind Shevchenko but the former AC Milan and Chelsea forward can also do the same with Marko Devic the lone striker.

Andriy Shevchenko was once one of the most feared strikers in the European game, and the 35-year-old will see playing on home soil at Euro 2012 as the perfect way to bow out from international football. However, chronic back pain threatens to ruin Shevchenko's fairytale finish.

Arrived in Turkey with national team to start training in preparation for the Euro.

The forward has been undergoing medical treatment in a bid to be ready for the tournament, and has been used relatively sparingly by his understanding club, Dynamo Kiev. Shevchenko insists publicly that he won't play unless he is fully fit, but it would still be a major surprise if he was not involved.

Shevchenko regularly terrorised defences in Serie A with AC Milan, and won the Ballon d'Or in 2004. However, by the time he moved to Chelsea in 2006 for a British record fee his physical attributes had started to decline, and he managed just 10 Premier League goals in two full seasons at Stamford Bridge.

Allowed to return to Kiev in 2009, he provided a timely reminder of his technical ability in Dynamo's Europa League win against Manchester City last season.

Should Andriy Shevchenko's fitness problems prevent him from making an impact, his Dynamo Kiev team-mate Andriy Yarmolenko may be the best alternative. The talented 22-year-old underlined his credentials with a goal in the recent friendly against Germany.

Yarmolenko scored on his full international debut against Andorra in 2009, but still took part at this summer's European Under-21 Championships in order to gain tournament experience.

Ukraine are 55th in the Fifa rankings - below Armenia and Panama.

Mixed. England won the first three meetings before losing 1-0 in a World Cup qualifier in Dnipropetrovsk in 2009, a match that marked Fabio Capello's first competitive loss as Three Lions coach.

The co-hosts qualified automatically, so have fine-tuned their preparations with a series of friendlies. Results have generally been disappointing, although Ukraine are unbeaten in their last four games, winning three of those.

While victories against Austria, Estonia and Bulgaria should boost confidence, Ukraine will also take encouragement from the 3-3 draw with Germany on 11 November.

The Ukrainians led 3-1 at half-time thanks to goals from Andriy Yarmolenko, Yevgen Konoplyanka and Serhiy Nazarenko, but the Euro 2008 finalists eventually hit back to salvage a draw.

Ukraine opted for a safe pair of hands when they named their new coach in April 2011, reappointing legendary former striker Oleg Blokhin. The first Ukrainian to win the Ballon d'Or, Blokhin had previously led his country from 2003 to 2007, helping them reach the quarter-finals of the 2006 World Cup.

Blokhin replaced caretaker Yuri Kalitvintsev, who led Ukraine's Under-19 side to the European title in 2009. Kalitvintsev will now work as Blokhin's assistant.

The 59-year-old, who has served two terms in the Ukrainian parliament, was criticised for remarks he made in 2006 lamenting the influence of African players in Ukraine's top flight.

This will be their debut at the European Championship, although the majority of the USSR team that started the Euro '88 final against the Netherlands hailed from Ukraine.

Ukraine's only previous major tournament was the 2006 World Cup, when they beat Switzerland on penalties to reach the quarter-finals, eventually losing to Italy.

Nataliya Dobrynska broke the pentathlon world record to edge out Jessica Ennis for gold at the World Indoor Athletics Championships in Istanbul in March and will challenge Britain's pin-up girl for heptathlon gold in London 2012.

Dobrynska already has an Olympic appearance to her name unlike Ennis, who will be making her Games debut in front of her home crowd.

Leonid Stadnyk. Once listed as the tallest man in the world, Stadnyk surrendered his crown after refusing to be measured by the Guinness Book of World Records. A vet who lives with his mother in the village of Podolyantsi, Stadnyk is reportedly 8ft 6in tall but refuses to be measured as he feels his height is a gift from God.

The Chicken Kiev - which became Marks & Spencer's first ready meal when it was introduced to Britain in the 1970s.