BBC Sport takes a closer look at the 16 teams who will contest the 2012 European Championship in Poland and Ukraine. Spain are the defending champions. Could Greece repeat their shock triumph of 2004? 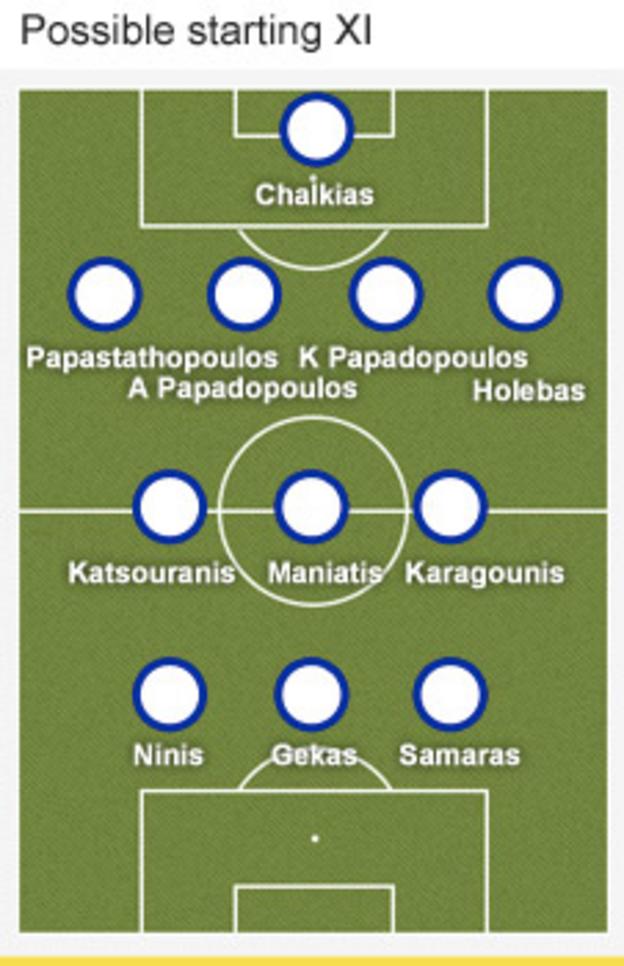 Former Greece midfielder Stelios Giannakopoulos: "The Portuguese coach Fernando Santos has his own mentality, and he has changed the style a little bit. It is a more controlled team, a team that tries to build from the back. It's different from Otto Rehhagel because he wanted more direct football.

"We don't have the big stars, but we have Georgios Samaras, Giorgos Karagounis and Kostas Katsouranis, who have played in the Euros before especially at 2004. The team is not based on the players, it is based on the team spirit and if someone tries to play for themselves, everybody loses and nobody wins."

Greece scored 14 goals in qualifying, fewer than any other side who qualified for Euro 2012 (including play-off goals).

However, Ninis' absence did not prevent the Greeks clinching qualification with victory against Group F favourites Croatia. The 22-year-old made his return in March, and has since signed a deal to play for Parma next season.

Born in Albania to Greek parents, Ninis was selected for the 2010 World Cup but veteran coach Otto Rehhagel appeared reluctant to trust the youngster. The midfielder made two substitute appearances in South Africa, spending a total of 41 minutes on the pitch.

He was eventually promoted to the starting line-up by new manager Fernando Santos after Greece drew their opening two Euro 2012 qualifiers. The move immediately paid off, his selection coinciding with a run of five successive wins.

Greece's success under Rehhagel was based around a rock solid defence, and they remain pretty miserly under his successor, conceding just five times in qualifying. A baby-faced but athletic centre-back, Kyriakos Papadopoulos was not used in the first half of the campaign but the Schalke youngster started four of the final five qualifiers, impressing observers with his maturity.

The 20-year-old, who can also play as a holding midfielder, was watched by a number of top European clubs, including Manchester United, before eventually joining Schalke in 2010.

Papadopoulos had not scored a club goal prior to this season, but he ended the campaign with five in all competitions. He has also provided an attacking threat in his brief international career - he netted twice in qualifying, including a goal against Malta 26 minutes into his debut.

Greece beat Croatia 2-0 in their penultimate qualifier, a result that proved crucial as they ended the campaign two points clear of Slaven Bilic's side in Group F. After a first half notable only for clashes between the two sets of supporters, the Greeks dominated the second period.

With key man Sotiris Ninis sidelined, the Greeks had to rely on set-pieces to make the breakthrough. Celtic forward Georgios Samaras scored the first after the visitors failed to deal with a corner, before Eintracht Frankfurt striker Theofanis Gekas doubled the advantage from another corner.

Succeeding Otto Rehhagel, who masterminded the Euro 2004 triumph, could have been a daunting task for Portuguese coach Fernando Santos, but the 57-year-old has had little difficulty in filling the shoes of "King Otto".

It certainly helps that Santos knows Greek football inside out, having previously led AEK Athens, Panathinaikos and PAOK, who he guided to Champions League qualification in 2010.

After a brief playing career, Santos quit to gain a diploma in electrical and telecommunications engineering, earning him the nickname 'The Mechanic' when he embarked on a coaching career that took him to Porto, Sporting Lisbon and Benfica.

Greece were unbeaten in Santos's first 17 games in charge, with the run eventually ending in a 3-1 defeat to Romania on 15 November.

Otto Rehhagel famously masterminded their surprise victory at Euro 2004, when the Greeks defied pre-tournament odds of 100/1. They also qualified in 1980 and 2008 but failed to win a game at either tournament.

The Greeks have failed to advance beyond the group stage in their two previous World Cup appearances, although they did claim their first win last summer by beating Nigeria.

Spyros Gianniotis was the first person to carry the Olympic torch on its journey from Greece to London. The 32-year-old will arrive in the capital as the favourite for the 10km open-water swim. Should he justify that status with gold, Liverpool can claim a little of the credit as the hometown of his mother Brenda.

Helen of Troy. The mythological beauty whose face launched a thousand ships.

The Duke of Edinburgh, who was born in Corfu but left Greece as an infant following political unrest. Though he speaks German and French, he is not fluent in his native tongue - in fact, it's all Greek to him.