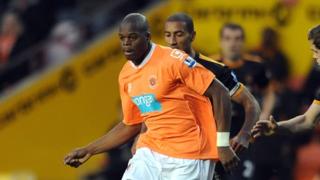 Harewood on his China adventure

Striker Marlon Harewood tells the BBC's World Football programme about playing in China for Guangzhou R&F, who he has helped to win promotion to the Chinese Super League, after joining on a short-term contract in July.

The 32-year-old former Nottingham Forest, West Ham, Aston Villa and Blackpool player talks of the impressive standard of his team-mates, his struggles with the language and the challenges of the local cuisine.

'I hated football' - how Cheltenham captain rekindled his career