BBC Sport takes a closer look at the 16 teams who will contest the 2012 European Championship in Poland and Ukraine. Spain are the defending champions. Could Denmark repeat their shock triumph of 1992? 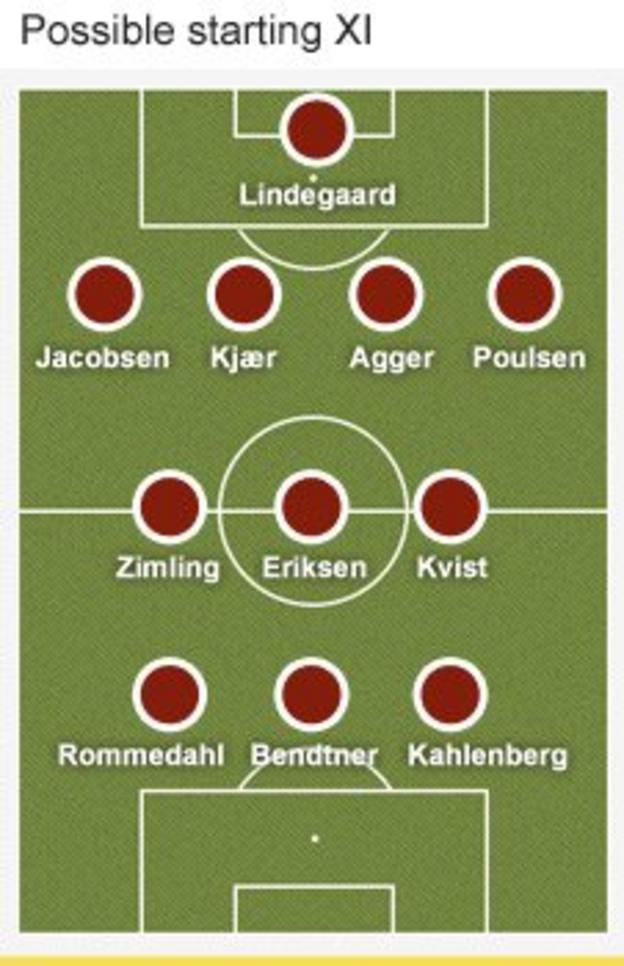 Former Denmark midfielder Jan Molby: "We have the same manager in Morten Olsen, who has been in charge for 12 years, and we play 4-3-3 and we play it extremely well. All the players will know their jobs and I think that's what international football is all about.

"The main players are a lone striker Nicklas Bendtner and we have a great player in the midfield with Christian Eriksen. But our best player is Daniel Agger, he's the one who keeps our defence together and if he plays well we have a chance. Eriksen is good enough to have an impact at the Euros and he has learned more about his responsibilities now."

Christian Eriksen was the youngest player at the 2010 World Cup, but the 18-year-old was restricted to two substitute appearances, spending a total of 44 minutes on the pitch. However, it is hard to imagine the Ajax player will be a peripheral figure at Euro 2012.

Enjoying my first and last day off. No rest for the wicked

Eriksen had two trials with Chelsea before joining Ajax in 2008. However, the Blues felt he was not strong enough for the Premier League, according to the player's father, who feels his son would be better suited to Spanish football. Eriksen is contracted to Ajax until 2014 and has indicated he is unlikely to leave before then.

Simon Kjaer is looking to get his career back on track at Roma after an unhappy spell with Wolfsburg. The 22-year-old defender moved to the Bundesliga side from Palermo for a reported £12m fee, but admits he struggled to adapt to German football.

Kjaer started two games at the 2010 World Cup, setting up a goal against Cameroon with a glorious cross-field pass, and was a regular in qualifying for Euro 2012.

The Danes overhauled Portugal in Group H thanks to an impressive 2-1 win against Paulo Bento's side in their final qualifier. The victory was orchestrated by playmaker Christian Eriksen, who constantly troubled the Portuguese defence.

The Danish defence was rarely troubled, although Cristiano Ronaldo pulled one back in the closing stages with a free-kick.

Morten Olsen guided the Danes to the knock-out stages of both the 2002 World Cup and Euro 2004. But since then results have been mixed; Olsen's side failed to qualify for the 2006 World Cup and Euro 2008, then were unable to advance beyond the group stage in South Africa despite a benign draw.

A defensive midfielder who won over 100 caps, Olsen said last year that he feels former assistant Michael Laudrup should succeed him as Danish boss.

Denmark's shock victory at Euro '92 was one of the most remarkable stories in the tournament's history. The Danes were beaten to a qualifying spot by Yugoslavia, but civil war in the Balkans meant the Yugoslavs were not allowed to compete.

Denmark manager Richard Moller-Nielsen, who had planned to renovate his kitchen over the summer, instead had just two weeks to prepare his side for the tournament in Sweden.

Little was expected from the Danes, yet they beat France and the Netherlands to reach the final, where they defeated Germany through goals from John Jensen and Kim Vilfort. Since then Denmark have reached the quarter-finals only once (at Euro 2004), and they failed to even qualify for Euro 2008.

The Danes' best World Cup showing was in 1998, when they lost 3-2 to Brazil in the quarter-finals. They also impressed at the 1986 World Cup, beating eventual runners-up West Germany in the group stage before crashing out to Spain in the last 16.

Martin Kirketerp and Jonas Warrer took sailing gold in an extraordinary race in the 49er class in Beijing. The pair had to borrow the eliminated Croatian boat after their mast broke on the way to the startline in the final race, but they made up four minutes of lost time on the field to cling on to podium top spot.

Viggo Mortensen. Born in New York to a Danish father and American mother, the Lord of the Rings star briefly worked as a flower seller in Copenhagen before finding fame.

Noteworthy Danish inventions include Lego and the first commercially-produced typewriter.