BBC Sport takes a closer look at the 16 teams who will contest the 2012 European Championship. Spain are the defending champions. Can Iberian neighbours Portugal steal their crown? 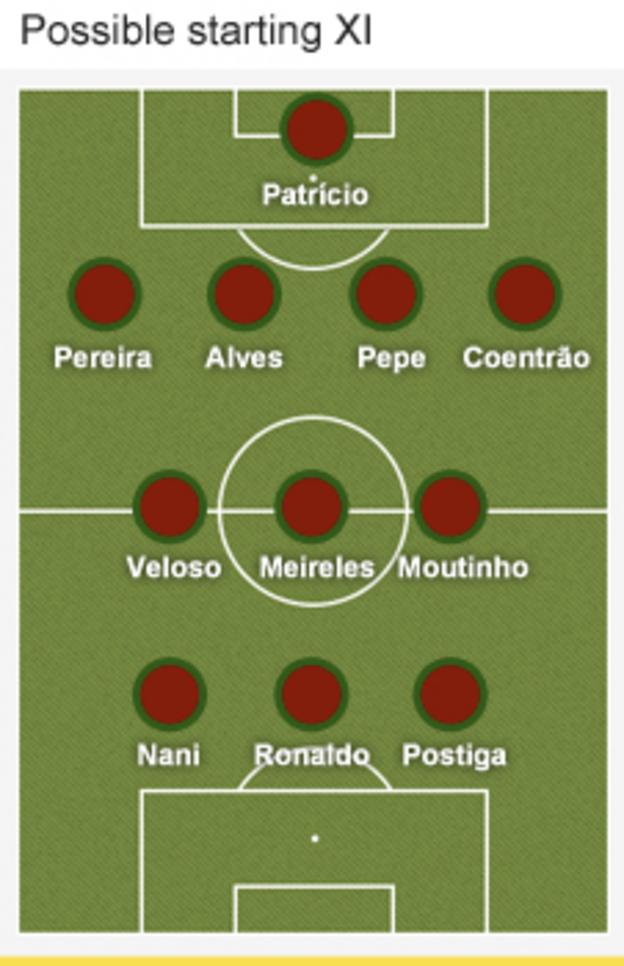 Portugal have evolved in the last 18 months in the image of their coach Paulo Bento; discreetly, but decisively. Gone is the miserable circumspection of the Carlos Queiroz era. The current crop is no 2004 vintage, but they move the ball fluently and attack with vim.

The key to this is a happier Cristiano Ronaldo, allowed to flourish under Bento while he was fettered by Queiroz's system. The movement of the midfield three also means Portugal are now an entertaining prospect.

Thank you to all my fans for an amazing season!

No introduction needed for Cristiano Ronaldo - only Lionel Messi can claim to be as good as the Real Madrid phenomenon. Officially the second-best player in the world - behind Barcelona's Argentine magician - Ronaldo has it all: pace, power, dribbling, heading, shooting, vision, passion.

Ronaldo demands the limelight on the biggest stage possible, just as he did for Manchester United. Has now scored an outrageous 112 goals in 102 league games in two years in Spain, and led exultant Madrid to the La Liga title this season as they finally got the better of Barcelona. Boss Jose Mourinho insists he should win the Ballon D'Or.

Sporting Lisbon, Barcelona, Inter Milan, Chelsea. Ricardo Quaresma has represented some of the biggest clubs in Europe, but never truly made it big. Hyped as a gifted young talent upon making his Portugal debut in 2003, the winger has failed to live up to expectations. But, still, there is hope. Now playing for Besiktas in Turkey, Quaresma was called up to the national squad in 2010 - after a two-year absence - and played in four of Portugal's qualifiers. This is his last-chance saloon.

After failing to win the first two matches of their qualifying campaign, Portugal left it late to secure their fifth successive appearance at the European Championship finals. But when they finally did so, it was in emphatic style.

Play-off opponents Bosnia travelled to Lisbon optimistic having ensured Portugal failed to notch an away goal in Zenica. But they were blown away spectacularly, 6-2. Cristiano Ronaldo and Nani slammed in fine shots past Asmir Begovic in the first half, while Ronaldo added another after the break before old-stager Helder Postiga struck twice either side of a superb Miguel Veloso set-piece.

Paulo Bento took over as Portuguese coach in 2010, just six years after retiring as a player. Now 42, Bento was suspended for five months - along with Abel Xavier and Nuno Gomes - due to bad behaviour in the Euro 2000 semi-final loss to France. Amid great success with Sporting Lisbon, in 2008 he was linked with becoming Manchester United manager Sir Alex Ferguson's new assistant.

Painful. Still a raw wound to everyone involved, players and supporters alike, Portugal managed to reach the final of Euro 2004 on home soil - only to lose against 100-1 tournament outsiders Greece. They have only played in four other editions of the tournament.

Third place in 1966 in England after beating the Soviet Union 2-1. They also reached the last four in Germany in 2006, where they were knocked out by France, and have only played in three other World Cup tournaments.

Triple jumper Nelson Evora beat Great Britain's Phillips Idowu by 5cm in the triple jump in Beijing, but Idowu took revenge in the World Championships in Berlin a year later. The pair resume hostilities at the Olympic stadium this summer.

Who else but self-styled 'Special One' Jose Mourinho, global face of men's grooming products and one of the most charismatic football managers of modern times.

Mourinho broke the Manchester United-Arsenal duopoly with Chelsea before moving to Real Madrid via a Champions League triumph with Inter Milan. He has now won titles in four different countries after guiding Real to the La Liga title in May, breaking Barcelona's three-year hold on the Spanish title.

Explorer Vasco da Gama was the commander of the first ships to sail directly from Europe to India in the 15th century.