BBC Sport takes a closer look at the 16 teams who will contest the 2012 European Championship in Poland and Ukraine. Spain are the defending champions. Could France claim their first trophy since winning Euro 2000? 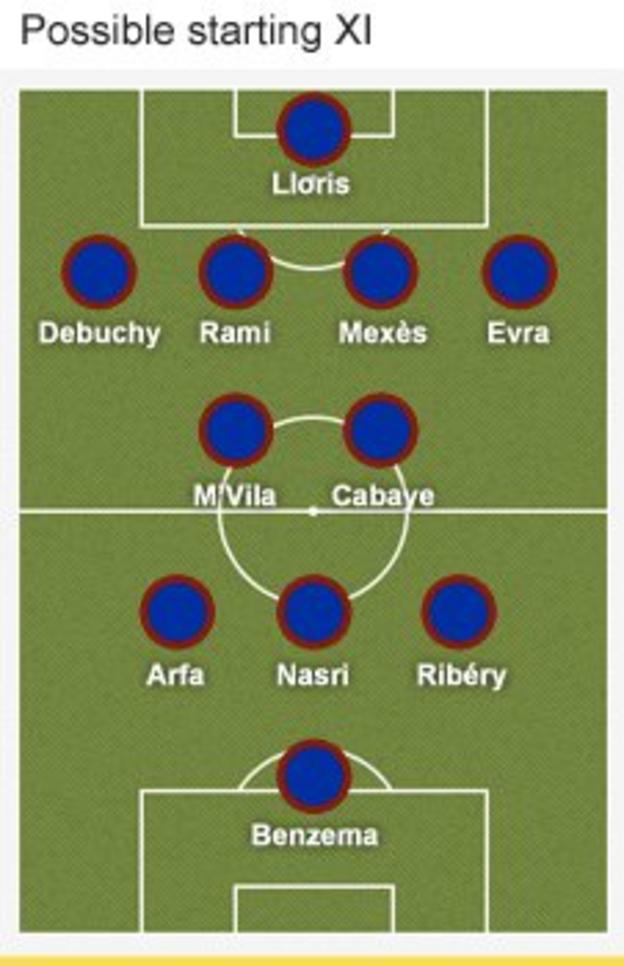 Coach Laurent Blanc has experimented with a number of different formations over the past two years. Goalkeeper Hugo Lloris and centre-backs Adil Rami and Philippe Mexes always play when available, Yann M'Vila is the mainstay in midfield, and Karim Benzema is the first-choice striker. Under Blanc, Les Bleus have become more attack-minded; they invariably aim to dominate possession using their short passing game, and rely on the skills of Franck Ribéry, Samir Nasri and Benzema to unsettle defences.

Karim Benzema was left out of France's World Cup squad because of disappointing form during his first season at Real Madrid, but new coach Blanc has shown more faith in him.

Great day celebrating with our fans at the parade

The 24-year-old has also won over Jose Mourinho this season. Benzema's improved form at the Bernabeu is in part down to a new fitness regime that helped him to shed seven kilos over the summer. He scored 32 goals in all competitions and assisted 15 others, and has begun to justify his €30m price tag. Benzema, Gonzalo Higuain and Cristiano Ronaldo netted a combined 118 league and cup goals this term, breaking the record for a trio (previously set by Barcelona's Lionel Messi, Samuel Eto'o and Thierry Henry in 2009).

Benzema contributed three goals in qualifying and netted decisive strikes in friendly wins against Brazil and England. The former Lyon star will be keen to make amends for his lacklustre display at Euro 2008, when he started two games but made little impression.

Yann M'Vila. The Rennes holding midfielder played for France at every youth level before making an accomplished senior debut in Laurent Blanc's first game in charge, a friendly defeat to Norway. He was a regular in qualifying, scoring once in eight appearances.

Former Chelsea defender Marcel Desailly recently urged Arsenal and Manchester United to sign M'Vila "whatever the cost", while a switch to Real Madrid has also been mooted. He is contracted to his current club until 2015, but Rennes coach Frederic Antonetti is resigned to losing his star player this summer.

C'est formidable. The French are unbeaten in their last five games against England, winning four of those matches. The Three Lions' last victory was a 1-0 win in Montpellier in 1997.

Two late Zinedine Zidane goals gave France a 2-1 victory when the sides met in the group stage of Euro 2004. They also drew 0-0 at Euro '92.

After a disastrous home defeat to Belarus in Laurent Blanc's first competitive match, it was absolutely crucial Les Bleus steadied the ship away to Bosnia-Hercegovina four days later.

Blanc, who was without several players still serving bans following World Cup misdemeanours, recalled Karim Benzema for the game in Sarajevo, and the striker scored a well-taken opener with 18 minutes remaining.

Florent Malouda made the game safe for the visitors six minutes later. France eventually secured qualification by drawing 1-1 with the Bosnians in their final match, although they had to rely on a 78th-minute equaliser from Samir Nasri to avoid surrendering top spot in Group D.

Laurent Blanc inherited a France team in turmoil. World Cup finalists in 2006, they were dismal at Euro 2008 and shambolic in South Africa, where the squad's mutinous actions prompted a government inquiry.

Blanc, who as a player earned the nickname "Le Président" thanks to his leadership skills, was the perfect choice to sort the mess out. The former Bordeaux boss lost his first two games in charge, but results since then have been impressive - February's win against Germany stretched their unbeaten run to 18 games.

Blanc's tenure has not been without hiccups - such as controversial comments about racial quotas at youth academies - but his stature within the game means the criticism that occasionally arises has tended to be muted.

Now Uefa president, Platini scored the opening goal in a 2-0 win against Spain.

Their second success arrived in 2000, when David Trezeguet smashed in a golden goal against Italy in Rotterdam.

World Cup winners on home soil in 1998, the French have reached the semi-finals on five occasions, and were runners-up as recently as 2006.

Sprinter Christophe Lemaitre attracted the headlines in July 2010 when he became the first white man to break the 10-second barrier for the 100m.

His personal best has since nudged down to 9.92 seconds, but he has some way to go to challenge the likes of Usain Bolt and Tyson Gay.

André René Roussimoff - better known by his wrestling moniker "Andre the Giant". Grenoble-born Andre said he was too large to fit on the school bus as a teenager, so was often driven to lessons by Irish playwright Samuel Beckett, who was a friend of his father.

The bikini - named by French engineer Louis Reard in 1946, with the inspiration coming from an atomic bomb test at Bikini Atoll in the Pacific.