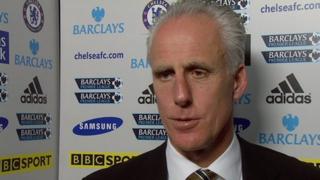 Wolves manager Mick McCarthy says the early goal his side conceded was critical after Chelsea ease to a 3-0 Premier League win at Stamford Bridge.

The former Valencia player completed the scoring shortly before half time steering Ashley Cole's low centre into the roof of the net.

Wolves are 17th, one above the relegation places, after their eighth defeat in their last 10 Premier League games.