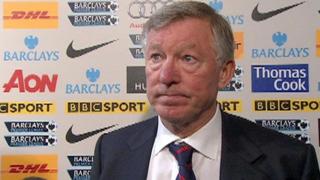 Manchester United manager Sir Alex Ferguson says nobody in Old Trafford thought Newcastle should have had a penalty, apart from the assistant referee who awarded it.

Demba Ba equalised from the spot after Javier Hernandez put United in front as the match finished 1-1, but Ferguson says the referee should have over-ruled his assistant and calls the decision a "travesty".

Jonas Gutierrez was sent off late on for a second bookable offence and Ferguson says a least one other Newcasle player could have seen red.