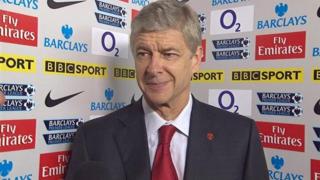 Arsenal manager Arsene Wenger says although he is disappointed not to claim all three points at home to Fulham, he is pleased with his team's reaction after a "tough" midweek Champions League match.

The Gunners went behind as Thomas Vermaelen scored past his own goalkeeper, but the defender made amends to draw his side level late on.

Arsenal beat Borussia Dortmund on Wednesday to secure their place in the last 16 of the Champions League and Wenger congratulates his team for their attitude against Martin Jol's side.