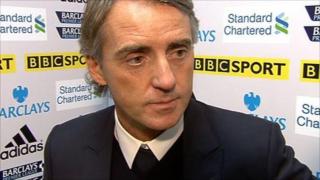 Manchester City manager Roberto Mancini admits he is satisfied with a point after a difficult 1-1 draw against Liverpool, in which his team played the last 10 minutes with 10 men.

Mario Balotelli was sent off for two yellow cards in the space of 17 minutes after coming on as a substitute, but Mancini does not believe the second tackle was a bookable offence.