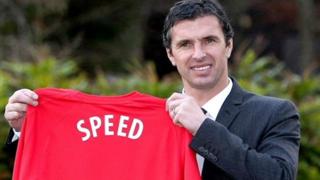 BBC Sport looks back at the career of Wales manager Gary Speed, who has died aged 42.

Speed began his career at Leeds United, winning the First Division title in 1992, before going on to play for Everton, Newcastle, Bolton and Sheffield United.

He is Wales' most-capped outfield player, representing his country 85 times.

Footballers hugging - players have their say