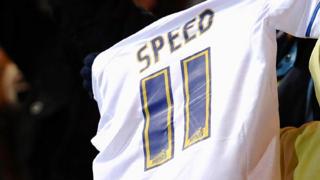 Leeds manager Simon Grayson praises the United fans in the wake of their 4-0 victory away at Nottingham Forest and says the result was a "fitting tribute" to his close friend Gary Speed, who died on Sunday.

The club's supporters chanted Speed's name for 11 minutes from the 11th minute of the match in honour of their former midfielder, who wore the number 11 shirt during his time at Elland Road.

In his post-match interview Grayson talks of the friendship he built up with Speed, starting from when they signed schoolboy terms at the Yorkshire club on the same day as 14-year-olds.