Darlington caretaker manager Craig Liddle has pledged his commitment to the role, despite a transfer embargo and a lack of coaching support.

Liddle, who took over from the departed Mark Cooper in October on an initial interim basis, combines the post with his job as head of youth development.

"If I don't do it, nobody else will do it," Liddle tells BBC Tees.

"It's either I get on with it, or I dig my heels in and make it difficult for the football club."

Chester-le-Street-born Liddle added: "I will continue to do what I can do to the best of my ability." 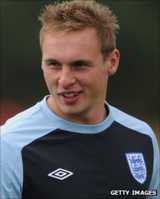 Meanwhile the 40-year-old, who made 327 appearances over seven years with the Quakers, has been involved with the youth team set-up since February 2008.

Uncertainty regarding the future of the football club has led to fears the club's youth set-up - that has produced Fulham goalkeeper David Stockdale and defender Dan Burn plus Middlesbrough striker Curtis Main - could be folded.

"The youth team - for this season alone as we're in our final year of Football League funding - are funded separately so there are no concerns about the youth team set-up.

"As far as I'm concerned the youth team is strong, I'd like to keep building it because it's a good part of the club.

"It's a part of the club that's working, so there's no problems that I'm aware of and that's me being totally honest," Liddle said.

You can hear the full interview with Craig Liddle on BBC Tees Sport on Friday, 16 December from 18:00.