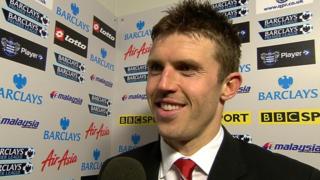 Christmas will be crucial - Carrick

Manchester United midfielder Michael Carrick is delighted with his goal in the 2-0 win over QPR and says that the Christmas fixtures will be a crucial period in the race for the Premier League title.

Carrick believes his goal came at a crucial time in the match as Manchester United were struggling to turn their large number of chances into goals, his strike to make it 2-0 effectively ending the match as a contest.