Botswana have been hit by scares to two key players, captain Mompathi Thuma and winger Sekhana Koko, as they prepare for their Africa Cup of Nations debut.

Thuma is said to have aggravated a hamstring injury that sidelined him from club action last month.

Koko also suffered a severe ankle injury during Sunday's training and has since stopped training with the rest of the team.

The duo look set to miss Wednesday's friendly against Lesotho in Rustenburg.

The Zebras are currently based at the Royal Bafokeng Sports Campus in Rustenburg, South Africa, on a 10-day camp that ends on Friday.

Botswana Football Association (BFA) vice president, Dintle Mphele said everything was going well in the camp with the only challenge being the captain's injury.

"The only problem we have is that Mompathi Thuma has got a knock which they are trying to work on," Mphele told BBC Sport.

"If you've been following him, he hasn't been playing regularly at club level because of that same injury." 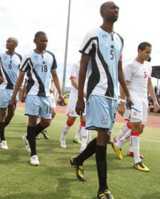 Thuma needs to rest and fully recover because if he is rushed, he may end up struggling to play at the Nations Cup

Botswana national team coach Stanley Tshosane is confident that his most trusted defender, Thuma, will also recover in time for the Nations Cup in Gabon and Equatorial Guinea.

The Zebras kick off their campaign with a clash against Ghana in Group D of the Cup of Nations in Franceville on 24 January.

"[Thuma] has been doing special training, but we are seeing signs of steady progress," Tshosane.

But Thuma's club coach, Louis Setshwane reckons the player may have to be rested.

"It's quite a serious injury," Setshwane told BBC Sport.

"I noticed when we played our last league game (on 12 December) he really struggled.

"He needs to rest and fully recover because if he is rushed, he may end up struggling to play at the Nations Cup."

Koko, who plays for Botswana's defending league champions Township Rollers, looks set to miss the rest of the training camp as he is struggling with an ankle injury.

"Koko also picked up an ankle injury on Sunday at training. Together with Thuma, they are doing special training," Tshosane said.

Tshosane will gauge his charges against Lesotho on Wednesday afternoon in Rustenburg.

"We will only play one friendly against Lesotho here in Rustenburg because we have been doing physical training," Tshosane added.

The national coach has been enthused by what he has seen at the Rustenburg camp. He praised the Botswana FA for organising the camp, adding that his players were responding well to training.

Meanwhile, the BFA turned down Zambia's request for a friendly, as it would have been on the same day that the Zebras are scheduled to play Zimbabwe in Bulawayo.

The Zebras play Zimbabwe's Warriors at Barbourfields Stadium early next month when they return from a 10-day camp in Doha, Qatar. The match has been pencilled in for 7 January.