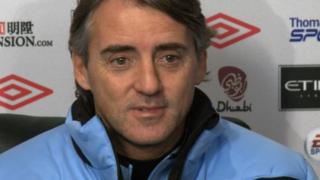 Manchester City manager Roberto Mancini believes the current top three in the Premier League - City, Manchester United and Tottenham - are the only teams capable of winning the title.

Looking ahead to City's FA Cup third-round tie against United this weekend, he says their local rivals will be "angry" after two successive defeats.

Mancini thinks last season's FA Cup triumph was important for City and will give them the belief to win other trophies.