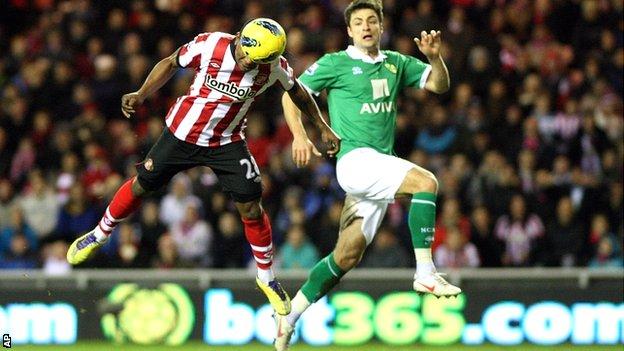 Sunderland moved up to eighth in the Premier League after ending Norwich's six-match unbeaten run in some style.

Fraizer Campbell, starting in the top flight for the first time since August 2010, opened the scoring with a superb right-footed volley from 25 yards.

The Black Cats added a third soon after the break when Phil Bardsley's cross fizzed in off Daniel Ayala's knee.

How times have changed at the Stadium of Light since

Sunderland recorded only one win in their first seven home matches in the league this term but O'Neill has presided over four in the last five.

There had been little to choose between these teams in recent meetings, with 11 of the last 14 matches settled by the odd goal and the other three drawn.

But Paul Lambert's first managerial challenge against his former boss at Celtic was a one-sided affair, the Canaries unable to find any passing rhythm and Sunderland far sharper throughout.

Campbell, who returned after an 18-month injury lay-off to in the FA Cup last weekend, forced Norwich keeper John Ruddy to push away his early header following a fine cross from the industrial James McClean.

Norwich had barely got out of first gear, and indeed would barely do so for the rest of the evening, but they might have taken the lead when Steve Morison flicked on a free-kick and Grant Holt hit a fierce volley on the turn. Fortunately for the home side, it was too close to goalkeeper Simon Mignolet to cause him serious difficulties.

But Campbell put Sunderland ahead in magnificent fashion, controlling a high ball neatly and unleashing a fabulous shot that soared over Ruddy into the corner of the net. It was the former Manchester United striker's first Premier League goal since April 2010.

Sessagnon nutmegged Bradley Johnson in the centre circle, sprayed the ball wide to Campbell on the right-flank, then darted into the six-yard box to head home the inviting first-time cross.

The intrepid 800-strong band of Norwich supporters who had made the 510-mile round trip needed something inspirational from their side in the second period, but another rapid Sunderland break ended their chances of anything to celebrate.

An intricate one-touch passing move on the right freed Bardsley and his cross from the byeline flicked off Ayala's knee into the net off the underside of the bar.

Norwich made a double substitution and one of the new arrivals, Anthony Pilkington, delivered a perfect left-wing cross for Morison but his header was fractionally wide and there were to be no further chances for the visitors.

Eight minutes from time Sunderland were able to give a debut to new loan signing Wayne Bridge, whose last Premier League appearance was against them for West Ham in the final match of last season.

Bridge received a warm ovation from the home fans, buoyed by an impressive performance from their team, who have lost only two matches in O'Neill's 11 in charge.

"I am particularly pleased for Fraizer Campbell, he's had a really tough time but has done magnificently.

"He's magnificent to have around, his overall enthusiasm is terrific and his play has been fantastic.

"Even at 3-0 Norwich had a chance and if it had gone in it could have been an uncomfortable last 20 minutes for us.

"I'm delighted with the team, they have put heart and soul into the games."

"We were second best the whole game.

"We were beaten by the better side on the night but we have to put that to bed and go again on Saturday."