There will be one particularly frustrated spectator at the Stadium of Light on Sunday, when north east rivals Sunderland and Middlesbrough battle for a place in the FA Cup fifth round.

Julio Arca, six years a Wearsiders favourite, has worn the red of Middlesbrough since his switch to Teesside in July 2006.

However, his dismissal at Coventry City on Saturday means the Argentine midfielder will miss out on a personal reunion due to a three-match ban.

"I knew what was coming, I knew I wouldn't be available to play - a game I was looking forward to," Arca told BBC Look North.

"When I saw the red card my world collapsed, there was not much I could do."

Arca emerged as fans favourite at Sunderland following his £3.5m move from Argentinos Juniors in July 2000, and racked up 23 goals in 177 games in the red and white stripes.

A goal on his debut against West Ham helped cement the bond, as did nine goals in 42 matches on route to the Championship title in 2004-05.

"You go out there for a team with the mentality of working hard, which I did at Sunderland," Arca added.

"You go there, give 150% every game and respect everyone, and I think people take that on board and respect you for that. 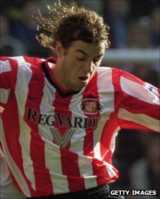 "If you do well with the team, they remember you more, I was there at a young age and did pretty well in my six seasons at Sunderland.

"I have good memories at Sunderland, but no regrets, all the times I spent there were good."

With experience on both sides of the Tees-Wear divide, Arca is well placed to assess the emotions of former team-mate Lee Cattermole going into Sunday's encounter.

The Stockton-born 23-year-old began his career at Boro, making three derby appearances - but is set to make his bow as Sunderland captain on Sunday.

"When you're on the pitch, you do the best for your team," said Arca.

"He'll want to carry on and keep his place in the side, but I don't think he has to show anything to Boro fans.

"He did his stuff when he was here, and when he left he was ready to move on."

Sunderland's recent revival under Martin O'Neill, added to a decent first half of the campaign for Tony Mowbray's promotion hopefuls suggests a competitive derby lies in store in the north east.

Arca continued: "It's a good game to play, it will be a good test for the team to see how we can compete with a Premier League team, and everyone is looking forward to it.

"I'll be nervous, but there's nothing I can do, so hopefully I'll be there watching, supporting Boro, and hopefully it will be a good game."