Middlesbrough defender Matthew Bates has said Lee Cattermole can handle the pressure of facing his home-town club when he captains Sunderland on Sunday.

Skipper Bates, 25, is best friends with his opposite number Cattermole, 23, having grown up together in Stockton and as players at the Riverside.

Bates told BBC Look North: "You've just got to get on with it.

"He won't let the occasion get to him, he'll get on with it, and I'm sure he'll acquit himself very well."

Boro's relegation to the Championship in 2009, along with fellow local rivals Newcastle, ended the prospect of regular season derbies.

"For Middlesbrough this is their biggest game," Cattermole told BBC Newcastle.

"If you look at the derby between Newcastle and Sunderland, in Boro fans eyes that is how they see Middlesbrough-Sunderland.

"It's a special moment for me, and it'll be funny being lined up alongside Matthew."

"I knew the ball numbers before the draw, so I knew as soon as it came out who we'd be playing. 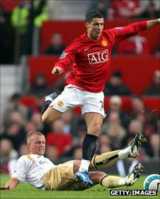 For us both to be walking out, me captaining Middlesbrough and him captaining Sunderland - two great club - will be a proud day for both of us, and for our families as well

"It's a great occasion for players, coaches, families, fans - a great game to play in.

"Local derbies for Middlesbrough fans don't come round that often, with being in the Championship.

Sunday's 13:30 kick-off, on police advice, means an early start for the travelling fans heading up the A19, with the families of local players such as Cattermole, Bates, Tony McMahon and Joe Bennett likely to be among the contingent.

"It'll be a proud day for both of us, going in the referee's room before the game and shaking hands, handing the team sheets over and then leading the teams out," Bates continued.

"It's something growing up we thought would never happen.

"For us both to be walking out, me captaining Middlesbrough and him captaining Sunderland - two great clubs - will be a proud day for both of us, and for our families as well."

BBC Newcastle and BBC Tees have full commentary of Sunderland v Middlesbrough in the FA Cup fourth round on Sunday, 29 January.