Defender Alan Tate has described his return to Swansea City's squad as a "light at the end of the tunnel" following his recovery from injury.

Tate has been included in Swansea's travelling party for Saturday's FA Cup fourth round tie at Bolton Wanderers.

The 29-year-old broke his leg in a golf buggy accident last August but has recently made three appearances for the reserves.

"It's a sort of light at the end of the tunnel," said Tate.

"It will be good to travel up on the bus and get back amongst it that way. Hopefully I can play some part on Saturday.

"It means the world to me to play in every single game that I've played in. To continue playing for this club is a massive honour for me."

Tate had been expected to be out for six months but the defender has returned a month ahead of schedule.

And after making a successful comeback for the reserves, manager Brendan Rodgers has included Tate in the squad for Saturday's game at Bolton.

"He is working very well, he has been out for a long time, but he is a wonderful pro and I have no doubt he will come into the squad this weekend," said Rodgers.

"He was outstanding last season and was just unfortunate that he had the freak accident. 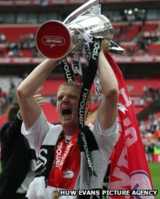 "It was a long road back for him and to be out that long was tough, but he dealt with it well and it's a credit to him and the medical team that he is back in contention earlier than expected."

Tate had captained the Swans in their opening Premier League match of the season, the 4-0 defeat at Manchester City and played in the Carling Cup defeat at Shrewsbury.

However the former Manchester United player suffered a fractured tibia of his left leg following an incident his club described as a "bizarre golfing accident."

"You obviously think the worst," said Tate, who joined Swansea in a permanent deal from Manchester United in February 2004 after two previous loan spells at the club.

"Is it serious? How long will it take to get back and obviously when you're on the road to recovery you start thinking 'will I be the same again?

"But now that I'm back and I've been training for a while I'm happy how things have gone.

"I don't really think about it now to be honest. I'm not someone who looks back on things that have happened. What's happened, happened and it's all about moving on now."

Swansea will face a Bolton side who have two former Swansea players in their ranks - Sam Ricketts and Darren Pratley.

Defender Ricketts left the Liberty Stadium to join Hull City in 2006 while Pratley moved to Bolton on a free transfer last summer after Swansea secured promotion to the Premier League.

"They're both good friends and they were both brilliant for this club while they were here," said Tate.

"Sam had two good years here [and] became a Welsh international while he was here.

"[He] had the chance to move to the Championship and did that and gone on to bigger and better things.

"Darren was brilliant while he was here. Everyone remembers the goal he scored against [Nottingham] Forest to clinch the [Championship play-off] semi final.

"He's gone on to Bolton where's doing ok as well."

Swansea beat Bolton 3-1 at the Liberty Stadium in a league game in October and Owen Coyle's side are currently 17th in the table.

But Tate is expecting a difficult tie at the Reebok Stadium against a side who needed a replay to overcome League Two side Macclesfield in the previous round.

"I'm sure they'll be taking it very serious."