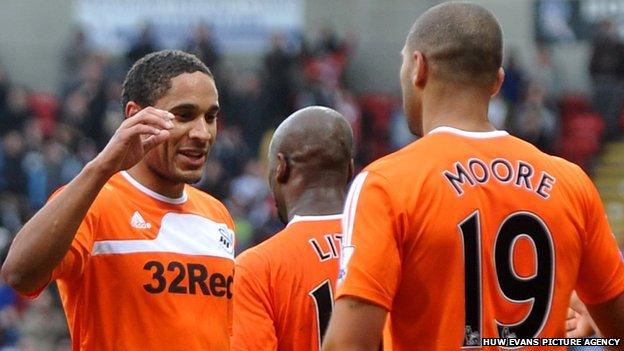 Williams was the only survivor as Rodgers made 10 changes for Saturday's FA Cup match at Bolton Wanderers.

The 27-year-old maintained his record of playing every minute of every Swansea game this season.

"He's fantastic," said Rogers. "He puts himself on the line for the team every week and he did that [against Bolton]."

Williams played his 22nd Premier League game of the season in last Saturday's defeat at Sunderland, extending his remarkable record of playing in each one of Swansea's last 160 league encounters.

Since joining the south Wales club in 2008 - originally on loan before making the move permanent - the Wales international has missed only two league games.

no rest for Williams

Rodgers, who made wholesale changes to his side with an eye on Tuesday's home Premier League match with Chelsea, revealed he wanted to give Williams a rest before facing the Blues.

But Tottenham Hotspur refused to allow on-loan defender Steven Caulker to play against Bolton, forcing Williams into action once again.

"I didn't want to play Ash today and the mark of the man as well... he was really struggling with his neck," revealed Rodgers after the 2-1 defeat at the Reebok Stadium.

Williams had an unfamiliar face behind him against Bolton as Gerhard Tremmel replaced first-choice goalkeeper Michel Vorm between the posts to make only his second Swansea appearance.

German Tremmel, a free-transfer signing from Red Bull Salzburg in August, was at fault for Bolton's winner after his fumble allowed Chris Eagles to score.

But Rodgers said: "It's very, very difficult when you're a keeper when you're not playing consistently.

"He's great support for Michel [Vorm], who's arguably the top goalkeeper in the league.

"There is certainly no blame attached, but we could have prevented their move for the second goal."

Rodgers denied his team selection demonstrated his lack of appetite for a cup run, but accepted the visit to Bolton had allowed an opportunity to ensure some of his regulars were as "fresh as possible" to face Chelsea as the focus returns to Premier League survival.

"We're obviously disappointed with the result, the performance was so-so but we'll go again," he said.

"We'll be really revved up and and looking forward to the league now and Tuesday night against Chelsea."