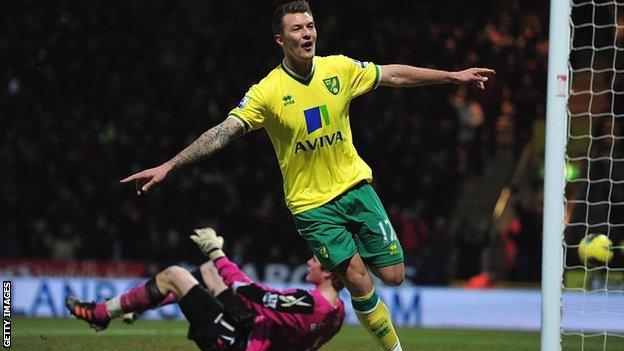 Norwich secured their fifth home league win of the season with victory over Bolton, despite losing both centre-halves to first-half injuries.

Simeon Jackson had gone close before he provided the cutback for Andrew Surman to score at the second attempt.

The result lifts Norwich to ninth but Bolton slip into the relegation zone as Wolves picked up an away win at QPR.

The visitors had arrived at Carrow Road on the back of a recent revival in their fortunes - including league wins over Everton and Liverpool and a draw with Arsenal - but they rarely looked like taking more than a point.

Norwich started purposefully as striker Grant Holt guided an athletic volley into the gloves of Bogdan.

That effort signalled the start of concerted pressure from the hosts and Jackson twice tried shots from acute angles after finding himself short of passing options in the middle.

If the Canadian international might have done better, team-mate Andrew Surman certainly lacked composure soon after as his shot from six yards rebounded to safety off the bar.

The Canaries' promising start was hampered by injuries to centre-back pairing Ayala and Whitbread that brought Russell Martin and Elliott Bennett into the action early.

Bolton failed to capitalise on the disruption in the hosts' defence however, a pair of long-range blasts from Petrov failing to test John Ruddy.

The Norwich goalkeeper had to wait until the 55th minute for his first save, a sharp parry from David Ngog's turn and shot, but he was quickly required to produce a second.

Petrov's corner almost sneaked in at Ruddy's near post, with the goalkeeper scrambling across his goal to punch clear as Chris Eagles rushed in.

Bolton boss Owen Coyle introduced Kevin Davies in an attempt to stretch the hosts, but the Canaries continued to carry a greater threat and the Trotters' hopes of even a point were extinguished as Norwich's neat passing game was finally rewarded in the final quarter of the game.

Jackson's pace twice carried him clear of Bolton defenders to produce only powder-puff finishes before he more successfully turned creator with a precise pull-back for Surman.

Tyrone Mears blocked the midfielder's first shot but the ball looped up invitingly for him to smash the rebound past a helpless Bogdan.

Holt had two excellent chances to kill the game, but contrived to guide Pilkington's cross over the bar and then passed when he should have shot after being played in by Steve Morison.

But Pilkington saw his side home as he reacted first to poke home after Bogdan lost control of Russell Martin's well-struck shot five minutes from time.