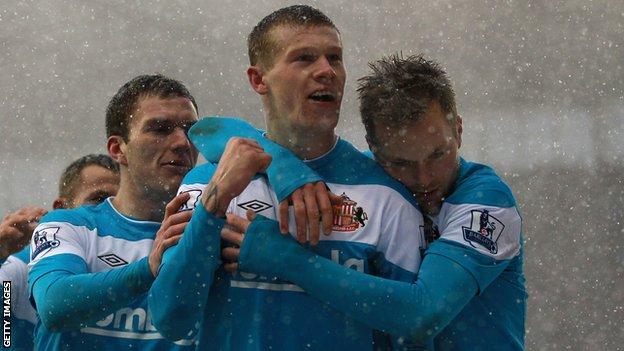 Sunderland's revival under Martin O'Neill continued as James McClean's goal made it five wins in six league games at the expense of 10-man Stoke.

And McClean capitalised by latching on to Stephane Sessegnon's through ball before applying a cool finish.

The game was played with snow falling throughout, with the white lines having to be repainted blue.

Those conditions hampered any prospect of a free-flowing game, with chances few and far between before Huth's dismissal just before half-time.

The defender slid in to tackle Meyler but missed the ball entirely, with referee Martin Atkinson showing the red card.

Manager Tony Pulis was furious and protested to the officials as the players went off at half-time.

Midway through the second half, Sunderland capitalised on the extra player advantage.

Sessegnon was given enough time to turn and send McClean through into the area. The Northern Irishman was strong enough to shrug off Andy Wilkinson before cutting across Ryan Shawcross and slotting past Sorensen.

Stoke persisted with a long ball approach as the snow-fall intensified. Peter Crouch had a good chance but headed straight at Simon Mignolet, while Ricardo Fuller cut in on his right foot on the edge of the area but could only manage a tame shot.

Stoke manager Tony Pulis: "The disappointing thing is the sending off. Robert skids in but doesn't touch the player.

"The referee hasn't taken the conditions into consideration. The player rolls around and stays down.

"But Robert hasn't touched him. The player tries to get him sent off. It's a disease that's creeping into the game."

Sunderland manager Martin O'Neill: "I haven't seen it back. Referees are talking now about challenges with a foot off the ground. I thought it was a nasty challenge.

"James McClean is having a great time. He is performing brilliantly for us. I couldn't ask for any more."