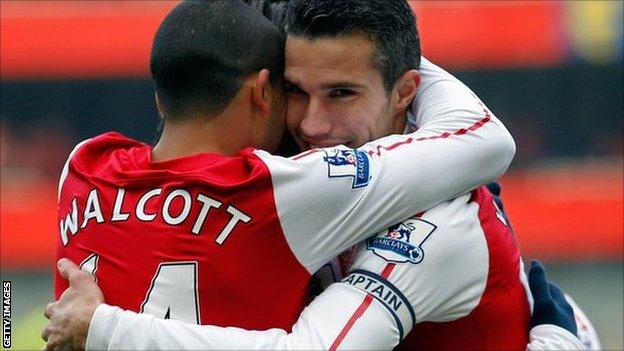 Van Persie's side-foot and Oxlade-Chamberlain's strike made it 3-1 before Blackburn's Gael Givet was sent off.

Arteta struck from 18 yards for 4-1 before Oxlade-Chamberlain, Van Persie and Henry completed the rout.

Despite sub-zero temperatures and a subdued atmosphere at Emirates Stadium, Arsenal made a blistering start and found the net after only one minute 22 seconds.

Predictably the opener came from their captain and talisman Van Persie, the Dutchman tapping in from close range after Francis Coquelin played in Theo Walcott on the right to square the ball across the face of goal.

Walcott and Oxlade-Chamberlain were a constant threat, while Blackburn failed to muster a single shot on or off the target in the opening half-hour.

Against the run of play, however, the visitors got themselves level in spectacular fashion.

Arsenal defender Laurent Koscielny was booked for hauling down Anthony Modeste 25 yards out and from the resulting free-kick Pedersen curled a fine left-footed strike into the top right-hand corner.

Bradley Orr, signed on transfer deadline day from QPR, came on for his Rovers debut after Rosicky flew into Jason Lowe with a late tackle that saw the Blackburn man withdrawn.

"What an afternoon for Robin van Persie, the art of finishing perfectly displayed - so unerring and beautifully done. It was a dreadful afternoon for Blackburn."

Arsenal were soon back in front, with Walcott played in by Alex Song and Van Persie finding the net at the near post for 2-1 from his cut back.

Rosicky was fouled by Martin Olsson in the build-up to Arsenal's third, but referee Andre Marriner waved play on. Van Persie fed a fine reverse pass through Blackburn's defence which Oxlade-Chamberlain ran onto before rounding the keeper and finding the empty net.

It was the 18-year-old's first Premier League goal and moments later Blackburn's task became that much harder with Givet sent off for a lunge on Van Persie.

After the break, it only took Arsenal a few minutes to increase their lead, Arteta crashing the ball home from 18 yards after Van Persie's corner had been headed clear.

Oxlade-Chamberlain made it 5-1, following Walcott's surging mazy run into the box, showing great composure to pick his spot under pressure and side-foot from close range.

Van Persie grabbed his hat-trick just after the hour, clipping the ball past Paul Robinson at the near post following Coquelin's cross from the right with Blackburn's marking non-existent.

With the game safe, Oxlade-Chamberlain gave way to Henry and Yossi Benayoun came on for Song.

In the final minute Arsenal broke once more, Van Persie playing in Henry inside the area. The Frenchman's shot deflected off Scott Dann into the net for his first league goal since returning to the club in January.

It completed a miserable afternoon for Blackburn who remain in the bottom three, while Arsenal move above Newcastle into fifth.

Arsenal manager Arsene Wenger: "It was an emphatic scoreline but the most important thing was to get the three points today. We have played some good games recently but the result gives us confidence for rest of season.

"Robin van Persie had some good assists and he is an exceptional player and is deadly when you feed him in the box.

"Alex Oxlade-Chamberlain is developing well, and he can assist and score as well. What is surprising to me is in September he looked junior, not mature enough, but in space of two-to-three months he is ready to be in the team.

"We have some catching up to do and the points are important. The consistency is vital for us."

On Henry's loan deal, which is due to expire after the 15 February match against AC Milan: "I haven't looked at it.

"Maybe the maximum possibility we have is two more weeks.''

Blackburn boss Steve Kean: "It's a difficult day for us because it's a difficult enough venue to play at with 11 men. It's the first time this season when we've been really turned over. We've been excellent on our travels.

"If there is intent with leaving the ground with two feet, the lads know the rules and you have to slide with one foot.

"We wanted to stay in the game after scoring, and not let the opposition get back in, but we forced it and let Arsenal back into it.

"We set ourselves high standards and that was not us today. I'm looking at the reaction of the lads with 30 minutes to go. The goal difference affects us as well.

"We've been in most games this season, apart from today. We've let ourselves down. Chris Samba wasn't in the squad today and we'll speak to him on Monday."