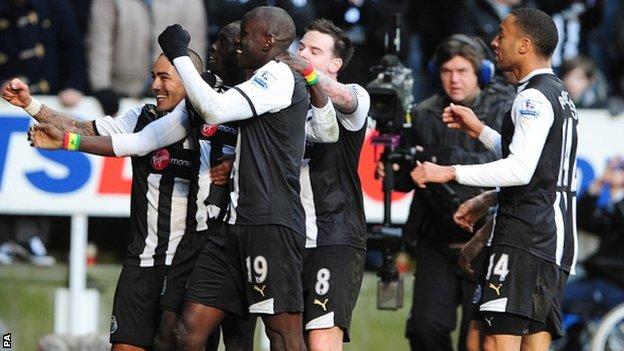 Papiss Demba Cisse marked his Newcastle debut with a stunning strike that helped his side beat Aston Villa to move back up to fifth in the table.

The £10m signing scored the winner in the second half when he chested down Jonas Gutierrez's cross and slammed in a half-volley from inside the area.

Senegal team-mate Demba Ba had put the hosts in front when he poked in from close range in the first half.

Robbie Keane levelled for Villa, firing home from about a yard out.

The visitors should have had more than just that one, but were thwarted on several occasions by keeper Tim Krul, who pulled off an outstanding save in the dying moments to deny substitute Gary Gardner.

Before Ba's opener gave Newcastle the lead, the Dutch stopper had already made four crucial saves, two from England striker Darren Bent, one from Stiliyan Petrov and another from Keane.

The visiting side were made to rue those misses when Ba, who returned to the starting line-up following his exploits at the Africa Cup of Nations, thrashed home from six yards after Villa failed to clear Danny Guthrie's cross.

The downside for Newcastle was that, even as the striker celebrated scoring his 16th goal of the season, team-mate Ryan Taylor was lying injured after colliding with Stephen Warnock, who blocked his shot in the build-up to the goal.

Taylor, who was playing on the right of midfield, had to be carried off on a stretcher with what looked a serious leg injury.

It meant a second enforced change for Newcastle, with injured striker Leon Best having been replaced by Cisse early on.

Villa carried on pressing and finally breached the Magpies defence in the fifth minute of first-half stoppage time.

Winger Charles N'Zogbia surged into the left-side of the area and played a square ball for Keane, who stole in past his marker and finished from about a yard.

Former Freiburg forward Cisse had looked lively after coming on in the 14th minute but failed with three headers and seemed likely to have to wait to open his account in England.

But with less than 20 minutes remaining the new Newcastle number nine scored with a scintillating strike.

Flying Argentine winger Gutierrez swung in a ball from the left that Cisse controlled with his chest before arrowing his strike into Shay Given's top-right corner.

Villa desperately searched for an equaliser, but their efforts continued to be scuppered by Krul who punched away a fierce Ciaran Clark drive before blocking Gardner's close-range effort with seconds remaining.

The result leaves Villa in 13th and without a win on Tyneside since 2005.